The Oregon Department of Transportation will open a new multi-use viaduct path along the Willamette River this Friday. This new viaduct is part of the large I-5 Whilamut bridge project and is one of several multi-use path improvements completed as part of that project. 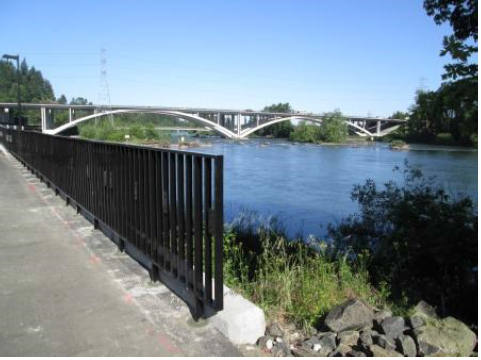 The path starts east of the Knickerbocker Bridge and runs along the south side of the Willamette River until it joins a new path that the city of Springfield is building along Franklin Boulevard. The City of Springfield is expected to install a stutter flash crossing of Franklin Boulevard near that connection as well. Though some advocates recommended keeping the existing South Bank Path that crosses under Franklin Boulevard to allow for easier connection for east bound cyclists it will be closed on June 30 so that restoration work can be completed in that area.

ODOT says that the new path “eliminates dangerous curves, improves commuter safety for cyclists, and offers beautiful views of the river and the Whilamut Passage Bridge.”  A new path along the south side of the Willamette River is in the Glenwood master plan and this viaduct will be an important connection once that path is complete and as Springfield continues it’s Glenwood revitalization work.

**Update: Path is open. EWEB apologized for the inconvenience and is working to improve outreach**

EWEB has had a change in their construction crew scheduling and has bumped up the timing for a project impacting the riverfront bike path.  The path will be closed TODAY from EWEB Plaza to the access at Hilyard (the whole EWEB property). There is signage posted at both ends of the detours to alert people. They say they expect the path to be open by 4:30 p.m.

It’s too bad better notice wasn’t give about a major path closure. Apparently this was sent to one city staff person on Friday but they were out until today. It doesn’t seem that hard to reach out to the bike community between the GEARs list, the various bike blogs, and BPAC. I doubt they would close a major road down without a bit of advance notice so why a multi-use path that sees hundreds of users a day? Also, on their detour they are directing people to ride the wrong way on the sidewalk from 5th to 6th. Communication between utilities, the city, and the community obviously needs to continue to improve.

This isn’t the article that I had planned to write tonight, but it looks like the Delta Bridge opening party is going to have to wait another few days.  It’s interesting that this post so quickly follows the one below it.

A KEZI Crimestoppers article/video was posted today about an event that happened “a few weeks ago.”  I’m not sure why it took so long for the article to show up, considering that the perpetrator is still “at large.”  The short version is that a man got mad when Ava Grenzsund passed him on the South Bank Path and  body-checked her off her bike.  She broke her left arm and severely bruised her right arm.  The suspect was stopped by a crowd and returned briefly for a few minutes, but gave a false name and rode away.  Police are still looking for him.

Take the jump for excerpts from the KEZI story and a link to their unfortunately sound-tracked video.

END_OF_DOCUMENT_TOKEN_TO_BE_REPLACED

This Friday, April 30th, the section of the South Bank Willamette River Path that runs under Interstate 5 between the Knickerbocker Bridge and Franklin Boulevard and the Glenwood area will be closed to all bicycle and pedestrian traffic from 7 am to 7 pm. The closure is part of the ongoing construction of the new I-5 Willamette River Bridge.

This is a rare case where there will probably not be a clear detour to get cyclists to a convenient alternate route. This particular stretch of the South Bank Path, pinned between the river and the railroad tracks, just doesn’t have many other options. If your ultimate goal is connecting from downtown Springfield to Eugene, the network of  North Bank Paths will connect up just fine (see below for the current state of the detours there). The direct connection from Glenwood to Eugene is another issue, though. Cyclists could skirt the south edge of eastbound lane of Franklin Boulevard, since a combination of gravel path and narrow walkway along that side of the road is passable with a mixture of riding and walking (Keep a sharp eye out for bikes or peds coming the opposite direction, since the westbound half of Franklin has no safe margin for non-motorized traffic!). Or, splurge on a little bus fare and treat your bike to a ride inside the EmX to get over the construction zone in style on Friday.