Skip to content
May is going to be a GREAT month for biking in Eugene! It’s a good time for fair-weather cyclists to roll those steads out of the garage and get back on two wheels and for everyone who rides bikes to celebrate together.  With so many events happening it’s the perfect time to try out something new too! Usually ride for recreation? Try out commuting! Casual cyclist who only rides for errands? Try a longer recreational ride! Want to get your kids riding more? We’ve got events for you! In this post you can find a rundown of some of the great events happening in Eugene/Springfield throughout Bike Month. Like any bike event in Eugene these can also be found on the Community Bike Calendar (a WeBikeEugene project). If you know of other bike events going on during May let us know and we’ll get them up on this list and onto the calendar!

Throughout all of May you can support the Safe Routes to School “Bike Safety Education Program” by both volunteering at one of the community rides held throughout all three school districts AND by buying your lunch at Wrap City in Kesey Square. Throughout the month of May, Wrap City will be donating a percentage of all of it’s sales to SRTS!  May happens to be Walk + Bike to School Challenge month too and while we are challenging our students to walk and bike more we challenge the community to support our efforts by volunteering and buying local! If you’d like to take your own challenge you can participate in the Business Commute Challenge. Form a team at your workplace, win some great prizes, and challenge your co-workers and friends to discover the joys of biking!

See how many you can do…

END_OF_DOCUMENT_TOKEN_TO_BE_REPLACED

WEDNESDAY, MAY 18, 5:30pm
Ride begins at the Vaclav Hajek Memorial and Safety Plaza on Bailey Hill Road between Kennedy Middle School and Churchill High School, and ends at the EWEB Plaza.

All area cyclists are invited to attend. 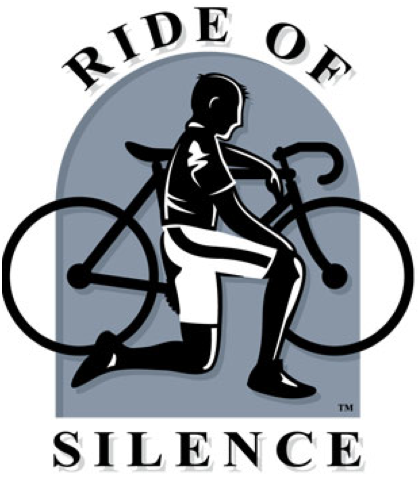 You can find information about the International Ride of Silence HERE.

The following is a press release from Sue Wolling, President of the Greater Eugene Area Riders (GEARs):

The Ride of Silence, an annual bicycle ride held to memorialize cyclists killed or seriously injured on local roadways and to promote traffic safety, will be held on Wednesday, May 19.  Riders will gather at the EMU Amphitheater on the University of Oregon campus (13th & University) at 6:45 p.m.  After a brief ceremony, the group will leave on bicycle to visit the sites of several bike fatalities in recent years.

The Ride of Silence is a slow-paced, silent ride, similar to a funeral procession.  Besides honoring those who have been killed while bicycling, the Ride seeks to give a visible reminder to motorists and bicyclists alike of their responsibility for ensuring safety on our shared roadways.

Wednesday’s ride will depart from the EMU around 7 p.m. on a flat, 10-mile route that will stop by three different locations at which bicyclists have been killed.  A brief memorial to the cyclist involved will occur at each site.  The ride is open to bicyclists of all ages and abilities.  Helmets are required by law for all cyclists under the age of 16, and are strongly encouraged for all.  For more information, contact Sue Wolling at 541-345-2110 or sue (at) eugenegears (dot) org.

The wonderful folks who write the city’s monthly InMotion newsletter have put out a mid-month supplement to help cover the plethora of events happening during National Bike Month (May, silly).  I’m grateful, because that means they’ve done all my work for me!

This short supplement covers the upcoming “Breakfast at the Bridges” events and this week’s Business Commute Challenge (featuring a couple Breakfast and the Bridges scheduled for Friday May 21st; see InMotion for locations).  May 21st is Bike to Work Day, so in addition to the Breakfast at the Bridges the BikeLane Coalition is providing free coffee at Eugene Coffee Company at 18th and Chambers and Gary’s Coffee at 525 High.  The InMotion newsletter also covers Wednesday’s Ride of Silence and Envision Eugene.

Take the jump for all the InMotiony details!