Lane Community College (LCC) might be considered a “commuter college” but getting to the campus up on 30th without a car isn’t really that hard. An event tomorrow is meant to highlight that by encouraging students to celebrate Earth Day by walking, biking, or taking the bus up to the campus. If you haven’t tried riding up to campus this is a great opportunity to try it with a group. Here’s the information from LCC:

The Sustainability Committee at Lane Community College encourages students and staff to walk, ride their bike or take the bus together to the 30th Avenue Campus on Earth Day, Wednesday, April 22.

Those who are interested can choose from two gathering times: 7:00 a.m. or 9:00 a.m. Participants should meet at the Amazon Station Park & Ride on 29th Avenue and Amazon Parkway in Eugene. Walkers and bicyclists are encouraged to wear safety vests or bright colors if they have them. Participants will be treated to light refreshments at the end of the event and will have the option to enter into a raffle. The Sustainability Committee has chosen to host this event, in its second year, because transportation is responsible for 28 percent of greenhouse gas emissions in the United States according to the EPA (Environmental Protection Agency) and 87 percent of the emissions at Lane according to the American College & University Presidents’ Climate Commitment. This event will offer great exercise for participants, a lot of fun and it will promote sustainable transportation to our campus and the larger community. 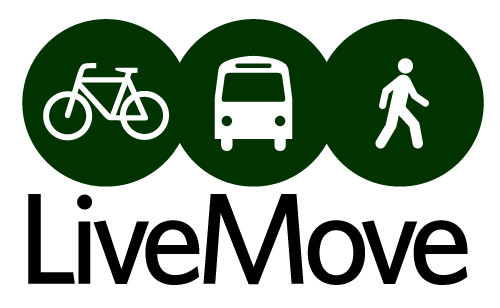 The next LiveMove speaker event is this Friday with Jennifer Wieland, recent Public Space Program Manager at the Seattle Dept. of Transportation. During her time with SDOT, Ms. Wieland helped to pilot the city’s Parklet Program. According to their handbook, “the term “parklet” originated in San Francisco to describe the conversion of a parking space into a small public park.”

Details on the event. Come join us:
Who: Jennifer Wieland, past-program manager, Seattle Department of Transportation
When: Friday, April 10  5 – 7PM
Where: Downtown LCC, Rm 112 (101 W. 10th Ave)
What: “Parklets and Play Streets and Bike Share, Oh My! Rethinking Streets in Seattle”
Why: Free appetizers, refreshments, and an expert in public space planning.

Via Eugene City Council Newsletter this bit of news (emphasis mine):

A series of recent projects, strengthened by community partnerships, have created new trails in southeast Eugene, resulting in improved commuting options and connections between neighborhoods.

The Northwest Youth Corps Outdoor School, supported by members of Friends of Hendricks Park and the Fairmont and Laurel Hill neighborhood associations, and volunteers from Oregon Woods Inc., received a City of Eugene neighborhood matching grant to realign a heavily eroded segment of the Floral Hill Trail in Hendricks Park. The improved trail joins Hendricks Park and the newly constructed .75-mile Ribbon Trail to Floral Hill Drive and creates a pedestrian connection between the Fairmount and Laurel Hill Valley neighborhoods.

In addition, Eugene Water & Electric Board’s (EWEB) need to place a water main line down a narrow City-owned parcel between 30th Avenue and Spring Boulevard resulted in an opportunity to improve a crucial commuter link. The City Parks and Open Space Division partnered with EWEB staff and members of the Disciples of Dirt and the Obsidians to build a trail over the location of the filled-in water main’s trench. EWEB staff built the bulk of the trail as a component of its project. The two volunteer groups worked with City Volunteer-In-Parks staff to build a connecting trail segment near 30th Avenue, while a second grant-funded youth crew worked to build a trail segment down a steep hillside near 29th Avenue. A trail segment connecting the dead ends of Central Boulevard near Laurelwood Golf Course and 29th Avenue completed the connection work.

The new trails allow pedestrian and bicycle access between 29th and 30th avenues and Central Boulevard. Bicycle commuters and pedestrians are able to get off busy 30th Avenue to travel between neighborhoods south of 30th, Lane Community College and other destinations. One regular hiker interviewed recently summed up the experience, “I’m becoming addicted to the trails; it’s so nice to be able to experience a little bit of nature a few minutes from home!” END_OF_DOCUMENT_TOKEN_TO_BE_REPLACED