Some good news is coming down the pipeline for local active transportation projects. At the recent Northwest Oregon “Super-ACT” meeting about $21.9 million in state transportation funding was approved for Lane County. Three of the funded projects are in Eugene and include;  the Amazon Active Transportation Corridor ($1,536,708),  the NE Livable Streets project ($803,000), and the Jessen Path and Lighting project ($1,898,662). The City of Eugene submitted the Statewide Transportation Improvement Program (STIP) grant applications earlier this year to ODOT.  The funding of the projects won’t be until 2015-2018 so even once final approval is obtained we are many years out from construction. Each project will require a unique set of outreach and design work. Reed Dunbar with the City of Eugene Transportation Planning Department stated that the Jessen Path and Lighting project would most likely be the first up since it is the most “shovel ready” project while the NE Livable Streets project will require the most communication and design work since it includes a number of different projects over 8 square miles. The Amazon Active Transportation Corridor lines up with the repaving of East and West Amazon which is currently scheduled toward the end of the 2014-2018 pavement bond measure schedule.

Here is some basic information about the three projects and what they might include: 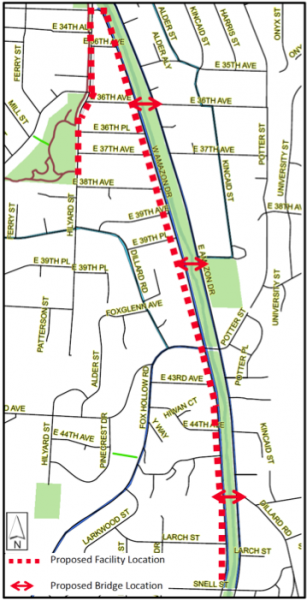 The Amazon Active Transportation Corridor helps to implement the city’s Pedestrian and Bicycle Master Plan by extending the popular Amazon Path further into south Eugene and making related investments that will enhance safety and accessibility in the Hilyard and West Amazon Corridors. This grant would fund a few key multimodal improvements that will make it easier to walk, bike, and access transit in south Eugene. The implementation of the project will help establish a major component of the River-to-Ridges active transportation corridor linking the Ruth Bascom River Path on the north to the Ridgeline Trail on the south.

Grant components include:
1. Widening the concrete sidewalk from 34th Avenue to the existing Tugman Park path network (approximately 4 blocks) to 12’ shared use path standard.
2. Install a two-way separated cycle track on West Amazon Drive featuring a physical barrier between the cycle track and automobile travel lane from Hilyard Street on the north to Snell Street on the south.
3. Reconstruct the Rexius Recreation Trail from Hilyard Street to Martin Street.
4. Install two additional prefabricated bridges and reconstruct the existing bridge to current standards. Proposed locations include even spacing along the corridor at 36th Avenue, 39th Avenue, and Dillard Road.

This project would implement a significant portion of the city’s Pedestrian and Bicycle Master Plan in the Northeast Neighborhoods (Cal Young, Harlow, Northeast) of Eugene. The solution would develop Livable Streets that are comfortable for walking and bicycling trips over a large geographic area (7.8 square miles) of the city and increase access to transit stops. Facility development includes a consistent wayfinding sign network and shared lane pavement markings, traffic calming in strategic areas to reduce automobile speeds and increase comfort for walking and bicycling, and installation of pedestrian islands and signals to make it easier to cross arterial streets. These improvements would also increase access to transit stops, and make it easier for school children to walk or bike to school. The project would:

The Jessen Path will be a key active transportation facility for the 28,228 residents of the Bethel neighborhood in northwest Eugene. The Jessen Path will create an east-west link across the north side of the neighborhood that connects to the Beltline Highway shared use path and eventually to the regional path network. The 12-foot wide path will extend 7,250 feet along the south side of the 222-acre Golden Gardens Park which is a significant natural and recreational resource for northwest Eugene. The Jessen Path will include human-scaled lighting designed to light the path for user safety but with shields to reduce skyward illumination and lighting of sensitive natural areas.

Other funded projects for the metro region:

The City of Eugene (along with point2point Solutions) also received funds for another SmartTrips Regional Residential Program ($372,845), a targeted marketing campaign for active transportation.

* LTD: Nearly $2 million for LTD to do an environmental study of a possible EmX line from northwest Eugene (River Road and/or Highway 99) all the way to Lane Community College.

Note that these allocations still need to be approved by the Oregon Transportation Commission, which given the approval by all ten counties (four ACTs) in northwest Oregon is likely.

Special thanks to Rob Zako for information on this post.