Below is a press release and flyer that ODOT released last week about a new app they’ve helped develop that will give planners and researchers data from volunteers who it on their smartphones. Not only will it collect route selection and reason for choosing certain routes but it also allows users to give feedback about crashes, safety or infrastructure issues. Josh Roll from LCOG, who helped develop the local CycleLane app is on the advisory committee for this new app and he’s excited about the potential of this new tool for cyclists throughout the state. ODOT will pass the data onto LCOG and city agencies to help them in their planning efforts.

I’ve used the app for a couple days now, including for my commute and a ride out to Mt. Pisgah. Once you finish a route and go to save it you’re asked a few questions about the route and why you choose it and different questions about the route. I haven’t used it to report any hazards or issues yet. I would still use the iBikeEugene app to report leaves or other road hazards locally as I know those get more immediate response from the city but this new app looks like a great tool. The more people use it the better data we have so download the app and help some planners out.

New ‘ORcycle app’ lets bicycle riders share
valuable information
Planners, researchers will use voluntary data to help make decisions
SALEM — Gathering valuable data about how bicyclists use the transportation system has always been a challenge. Starting Nov. 10, a new Smartphone app created by the Transportation Technology and People (TTP) lab at Portland State University, in partnership with ODOT, will provide data that can help planners and others make decisions based on users’ feedback and facts never before gathered in one place. The goal of the app, called ORcycle, is to get cycling data from people who ride bicycles voluntarily contributing via their Smartphone, from anywhere in the state.
ORcycle lets participants record cycling trips, display maps of the rides, and provide feedback regarding crashes, safety, or infrastructure issues – data which transportation planners currently lack in sufficient quantity. Prior to ORcycle, there was no systematic way to receive feedback regarding bicycle route safety or riders’ comfort level with bike lanes, routes, signals, etc.  By opening the app and recording data whenever convenient, riders will be submitting data to the ORcycle program. Transportation planners across the state will then be able to access the aggregated data to better design, build or upgrade bicycle facilities and other bicycle-related projects.
The app follows a strict privacy policy and does not ask for a name or address, and users have control over the data they are sharing. The ORcycle app can be downloaded fromGoogle Play (android) or Apple’s App Store (iOS for iPhones).  More info about the app is available at http://www.pdx.edu/transportation-lab/orcycle. 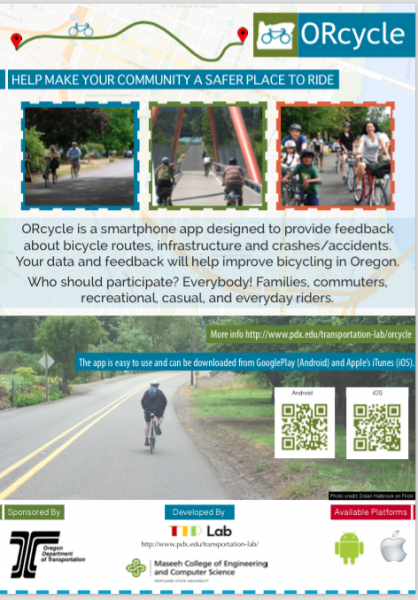