The City of Eugene Public Works Transportation Planning staff held their third public meeting on the “Campus to Downtown Bike Connection” project (also known as the David Minor Bikeway) last night and have officially recommended a two-way cycle track from Alder to Olive. Though much design work remains to be done and funding secured this is the first step in creating a safe, convenient, and comfortable active transportation connection from the two of the cities highest bicycle trip generator nodes.

As part of the project they laid out some short, medium, and long term recommendations. Those include wayfinding for the short term,  bike boulevard improvements on 12th (with sharrows and signage) and improving the multi-use path between Oak and Willamette for the medium term, and the two-way cycle track for the medium to long term. No specific timeline was given beyond “this summer” for the short time wayfinding improvements.

Specific designs were also not part of the presentation with only a brief explanation of what the cycle track might look like throughout the corridor, where parking would be moved or reduced, where bike specific signals and signal timing might be implemented and where travel lane consolidation might occur. It was stated that it would not be painted green throughout the length of the project as depicted in the original LiveMove design recommendation but used only at specific “conflict zones”. The city would also place parking bays at specific locations to replace some lost on-street parking and the highest cost improvement would be the placement of signals for westbound cyclists and upgrading the current signals. Whether there would be physical separation with a curb or planters or simply a painted buffer will apparently be decided in the next design phase as well. END_OF_DOCUMENT_TOKEN_TO_BE_REPLACED

The next public meeting regarding the David Minor Bikeway proposal, connecting the UO campus and downtown on 13th with a 2-way separated bikeway, is on June 24th from 5:30 p.m. – 7:00 p.m. in the Eugene Library Bascom-Tykeson Room.  Previous meetings have been held and there has been overwhelming support for the project so far. Though a couple businesses have raised concerns about the possible loss of parking other businesses and many community members have expressed an interest in seeing improvements for the corridor. Creating a two-way bike facility will help the wrong-way sidewalk riding that is occurring, providing not only a direct, safe, and comfortable bike connection to and from campus and downtown but also a more pleasant pedestrian environment for those walking the corridor.
Even if you have attended previous meetings it will be important to attend this one as well since staff will be presenting information on engineering and signal timing analysis as well as collect feedback on potential design options. City staff still needs to hear from people that this is an important connection to the community and without the students in town to represent that others need to show their support for the potential first real cycle track project in Eugene. If this project goes in and is designed well it could be the first step in connecting up our whole bike network with a core of more comfortable bikeways for all.

Let city staff know that you want to see a safe and physically protected bikeway here to create a corridor that is better and more predictable for ALL road users. One key piece of the design will be to make the bike and pedestrian movement a priority and not allow the many north-south corridors for cars interrupt the flow for active transportation users.
With the Capstone project being completed this summer and our downtown in the midst of a major revitalization it’s essential that this facility happen sooner rather than later. Ask the city to place this project on the front burner for completion in 2015!  Once the city prioritizes the project and moves forward with planning it then the funding search (public and private dollars) can begin in earnest.
There is a new web site that has many answers to frequently asked questions about the David Minor Bikeway: http://davidminorbikeway.com. Have a look and we’ll see you on Tuesday, June 24th!

Update: LiveMove says they will wrap up this final concept plan and redesign over the coming weeks. Once it is complete they will give an update here on WeBikeEugene and to city staff and elected officials.  In the meantime you can visit livemove.org/13th for more information about what was presented this week. If you are interested in helping advance the 13th Ave. Renaissance plan that LiveMove believes will improve safety, increase accessibility and invigorate this important corridor’s economy you can reach out to LiveMoveUO@gmail.com

Via Matt Cooper (UO Office of Strategic Communications) at AroundtheO.edu

Eugene will study a redesign of 13thAvenue by University of Oregon students when it considers changes for the roadway in the months ahead, a city official said recently.

The news capped an open house on the redesign held May 28 by LiveMove, an interdisciplinary student group that spent the academic year rethinking the corridor for safety and access.

Under the LiveMove ByDesign project, students studied 13th Avenue between downtown and campus, seeking to improve safety and access for bicyclists, motorists and others. They tracked transportation and parking behaviors and incorporated case studies from across the globe to reconsider traffic flow, lane spacing, parking and other concerns.

“A major demographic shift is taking place whereby fewer vehicle miles are being driven, rates of drivers’ licenses are going down and the next generation increasingly prefers places where many daily trips can be made by foot, bike or bus,” said Joe McAndrew, LiveMove president. “We still value automobile access, but we also want the same level of safety, directness and comfort for people on bike and foot. 13th is a major connector between campus and downtown and our effort is to create a signature corridor to spur additional economic development, create safe and direct two-way bicycle access and to catalyze a renaissance that can help meet many community and university goals.”

With the Capstone housing project at 13th and Olive Street promising to draw 1,200 university students this fall, the corridor will see a rush of additional people making their way eastbound to campus by bus, bike, foot or car. The avenue is END_OF_DOCUMENT_TOKEN_TO_BE_REPLACED

LiveMove, the UO student group focusing on transportation and livability issues, is hosting an open house to share a vision for this critical community corridor:

The students have developed a project called ByDesign to conduct a corridor study and re-design of 13th Avenue. The group has used this academic year to conduct its work, and have developed a preferred roadway re-design through extensive observation of transportation behavior, parking utilization, and of case studies across the globe.

The group will present its findings and ideas at an open house on May 28th from 5:30-7:00 in Lawrence Hall Room 206 @ the UO Campus. Attendees will have an opportunity to give feedback and input, and initiate community discussion on improving the corridor’s safety, accessibility and livability, while also stimulating economic activity and achieving city and university sustainability goals.

This event is open to the public. 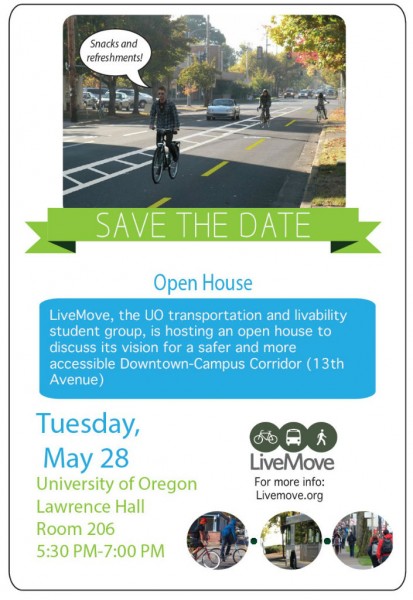 *Updated– I’ve added some corrections and updates after talking with ODOT and the City of Eugene more.

As we reported back in March (twice), April, May and August the City has some great plans for completing one of the ‘missing links’ in the Eugene bicycle transportation system, the connection of the Alder St. ‘bikeway’ to the river path system. The city received official word on November 16th that they were awarded a $707,000 grant from the ODOT Bicycle and Pedestrian Grant Program and can now move forward with those plans.  The City decided to piggyback the grant application with their Pavement Preservation Program which is slated to repave Alder from 19th 18th to Franklin in the summer of 2011.  At the end of October the Oregon Bicycle and Pedestrian Advisory Committee (OBPAC) met in Seaside Astoria to decide which of the 90 communities that applied for over $37 million in projects would receive the $5 million that was available. Five  Eleven communities were awarded funds including Eugene plus two alternates if extra funding comes available.

Key components of the project include the construction of a new south AND northbound bicycle facility on Alder Street, a new signalized crossing at Franklin and Alder, on-street parking reconfiguration on 13th Avenue, increased bicycle parking capacity, and significant pedestrian enhancements in the small business district. END_OF_DOCUMENT_TOKEN_TO_BE_REPLACED