I have been in contact with the City of Eugene staff concerning two very heavily used cycling routes, Fox Hollow Road and Dillard Road.  The bad news is we’re going to have to wait for the Fox Hollow fix until 2017 or later. The good news is, most of Dillard will be fixed this Summer. Keep in mind that the city staff is doing the best they can under the current funding program. What is needed is either a bond measure or gas tax to cover the 50 miles of unimproved streets in the city. Please contact your city councilor to start the ball rolling. And do it today!

“Fox Hollow Road, south of Donald Street is classified as an unimproved street. Unimproved streets are generally defined as those streets not built to City street standards. More specifically they lack an engineered road base and paving structure, curb and gutters, and sidewalks. There are approximately 50 miles of unimproved streets with in the City limits. Unimproved streets received limited maintenance such as potholes repairs that are 3” or greater in depth, periodic street sweeping, and in the case of Fox Hollow snow and ice control as needed.

Unlike improved streets, local gas tax and Bond Measure funding are not used to fund resurfacing unimproved streets. Public Works does have a program that addresses unimproved street surface treatments. The Enhanced Street Repair Program currently receives $200,000 annually from the road operating fund to provide asphalt maintenance overlays on our 50 miles of unimproved streets. Currently there is an estimated three million dollar backlog of projects similar to Fox Hollow Road.

Fox Hollow Road between Donald Street and Cline Road (City limits) has been identified as a potential project through this program. We are hopeful that in the next few years continued program funding will enable Public Works to overlay this section of Fox Hollow Road. Paving is limited to the existing road surface and does not include adding bike lanes. During the paving process we look for opportunities to widen the road shoulder to provide pedestrians and bicyclists safer passage. In the meantime we will continue to provide surface maintenance as described above. I have asked our surface maintenance team to inspect Fox Hollow Road and make appropriate repairs as needed.

More than likely it will be no sooner than the 2017 construction season before Fox Hollow Road from Donald Street south to the City limits will be paved. I have committed our program resources to another south Eugene project this summer, Dillard Road from 43rd Ave. to near the City limits. This will be the largest projects in terms of square footage and funds we’ve taken on through this program. I am currently working with our contractor on an estimate and will have a better sense of whether will be available for this construction season. Fox Hollow is also a large project and more than likely we won’t have sufficient funds to add it to this year’s project list. I also have scheduled our contractor to provide me with an estimate for Fox Hollow so we have a better idea of costs.”

I ride my bike everyday in and around Eugene, pedaling through traffic in the rain and fog over dimly lit streets. I look into the faces of people riding bikes and driving cars, and I see trouble in the streets.

Far too many people are using their phones and texting while driving. And judging by what I see, it is not a safe practice. According to the National Safety Council, 1.6 million accidents each year are caused by texting while driving. That’s nearly 25 percent of all accidents. At roughly 3,200 pounds, the typical car can become a giant weapon, dangerous to everything and everyone around it. All drivers should focus on driving safely.
As a person who bikes, I worry for my own safety, as well as for my family, friends and other people who bike and walk around Eugene and Springfield. I feel that anyone operating a motor vehicle should do so with the utmost respect and care for others. I beg you to create rules for yourself, your kids too (if you are a parent to new drivers), to eliminate any distractions while driving. And since I hesitate to ask others to do things that I’m not willing to do myself, I am committing to never texting in traffic. Ever.

I drive a car too and respect goes both ways. I’m amazed at how many bike riders and pedestrians don’t seem to respect other people using the streets. Whether running stop signs and traffic lights, riding without lights at night or walking out from between parked cars, people don’t seem to respect others in traffic or even the basic laws of physics. If people who ride bikes want car drivers to follow the laws, then bikers should follow the laws too. The laws are there to keep the roads safe for everyone. Expecting others to follow the laws while you ignore them is disrespectful.

Now, let me come back to the foundation of this issue. Respect is something that we all want. Respect is personal. It is an understanding that someone or something is important and should be shown consideration. Having respect for others using the streets means that you learn the laws and follow them. Respect doesn’t cost you anything to give to others, and the benefit is a safer, more comfortable environment for everyone.

Register Here for the Eugene-Springfield Safe Routes to School bi-annual Confident Cycling for Families Class! The class is April 18th, 9am-Noon at Roosevelt Middle School. Families can also join us at 1pm for a Kidical Mass bike ride.

Class attendees will not only learn about basic traffic skills but also learn how to perform a bicycle safety check, how to properly fit a helmet, how to size a bicycle for a child, and how to properly carry things on a bicycle. Information will also be provided about gear and clothing, proper lighting, use of lights, and locking a bike. Half the course will be conducted indoors and the last portion will be held in the parking lot with skills & drills before a final ride on neighborhood streets.

This class is made for parents AND kids so all participants are asked to bring a bicycle and a helmet with them to class. Some reduced cost helmets will be available. Anyone requiring a loaner bicycle for the class is asked to state that in the comments section of the registration form. This class is geared towards children ages 5 – 13 and is free and open to all families but registration is required.  Join the Facebook event and spread the word! 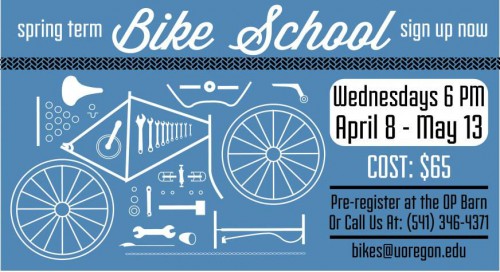 This six week course will cover topics like brakes, derailleurs, bottom brackets, hubs and more. Each two hour class will provide an in-depth description of the topic and time to explore that system on your own bicycle. This course will give you skills needed to maintain and repair your standard road, mountain or commuter bike. Bring your own bicycle and clothes you are comfortable working in. Internally geared hubs and coaster brakes will not be covered.

I may not have time for well researched articles like I did a few years ago, but I do seem to have time to make videos!  Here is a compilation of bike lane blockers from a winter of commuting.

Today’s the big game but the UO is already national champions for cycling! Well officially they are Gold and Davis and Stanford are currently ahead of them with Platinum but they are hot on their heels. Below is some information about some of their current programs, some of which are available to the broader community with an Outdoor Program membership.

Other big news from the program is that Kelsey Moore has been hired as the new Program Coordinator for the Bike Program, replacing Briana Orr who was hired last year as a Communication Specialist by the Cascade Bicycle Club. You may know Kelsey as the manager at Arriving by Bike or her work with Willamette; A Place for Everyone. It’s really exciting to see Kelsey move into this position, she’ll bring great energy, knowledge, and community connections to this growing UO program. Here’s some information on some current projects at the UO Bike Program: END_OF_DOCUMENT_TOKEN_TO_BE_REPLACED 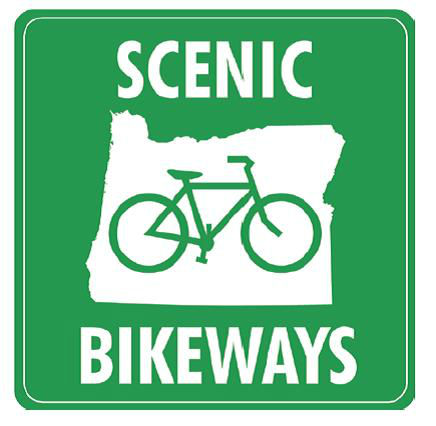 Have you cycled on any one of Oregon’s twelve Scenic Bikeways this year? Want to help make Oregon even better for cycling? Take this survey now. Closes in two weeks!

Travel Oregon and Oregon Parks & Recreation Department (OPRD) are embarking on an economic impact and user study of bicycle recreation and travel for Oregon’s Scenic Bikeways. As part of the information gathering, the two organizations want cyclists to respond to this online survey by Dec. 31. Oregon is the only state in the nation with Scenic Bikeways – offering Oregon’s “best of the best” road routes – and the feedback gathered can make them even better.

Travel Oregon and OPRD want to hear how often people ride the Scenic Bikeways and get feedback on what people thought of them. The responses will be kept confidential and be used for statistical purposes only. The survey takes about 7 minutes and the results will help improve the Oregon cycling experience for all. 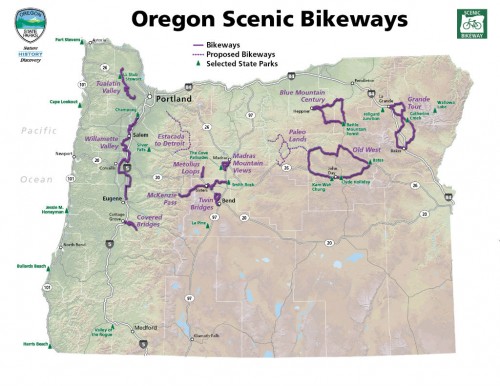 Making Downtown Eugene a Great Place for Bicyclists, Pedestrians and Business:
A Vision for a Vibrant Community

*How can a bicycle and walking-friendly downtown benefit local businesses?

*What’s happening and what still needs to happen to make downtown a vibrant place that people can enjoy by foot or by bike?
This is a public meeting and all are encouraged to attend.  After the BPAC and city presentation we will have time for public dialogue and comment. 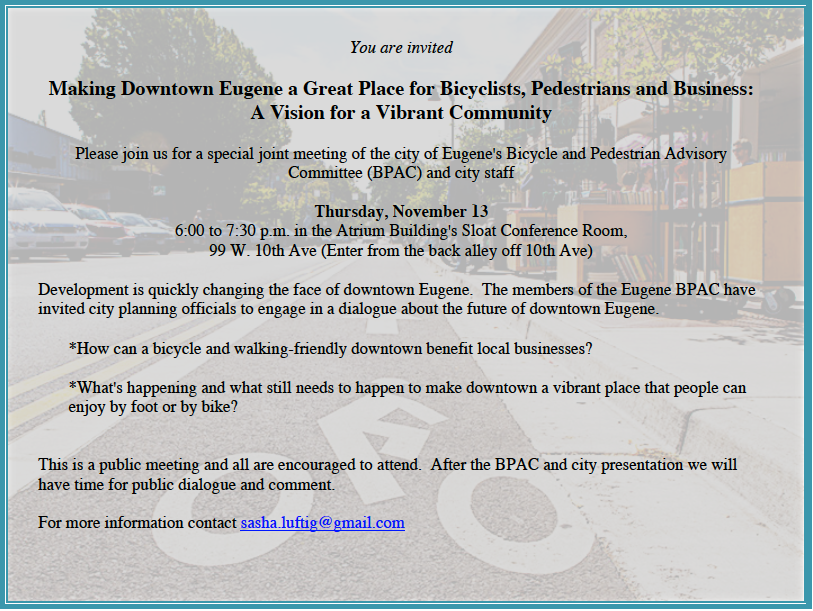 The Safe Routes to School bike fleet maintenance night is this Thursday!
The Eugene-Springfield SRTS program is having our fall bike fleet maintenance night and you can come help!  We will be servicing a fleet of bicycles to prepare for this fall’s Bicycle Safety Education programs in the schools across the region. Please come out and help if you are able!
Bike Fleet Maintenance (all levels of bike mechanic skills encouraged to come) and FREE Café Yumm food!

You can help play an integral part in preparing our bikes to teach over 1,500 students Bike Safety Education traffic skills as part of PE class this school year across Eugene and Springfield.

Please drop Zane an email to let him know you’ll be coming: Zane.S.Wheeler (at) ci.eugene.or (dot) us