Cascadia Mobility (operating under the umbrella of Forth Mobility Fund) is the new operator of our PeaceHealth Rides bike share program in Eugene.  As they take operations over from the City of Eugene, who has been operating the system since June of last year, they are looking for a new Community Outreach Manager and two new field technician.

You can find out more about the positions at: forth.hiringthing.com 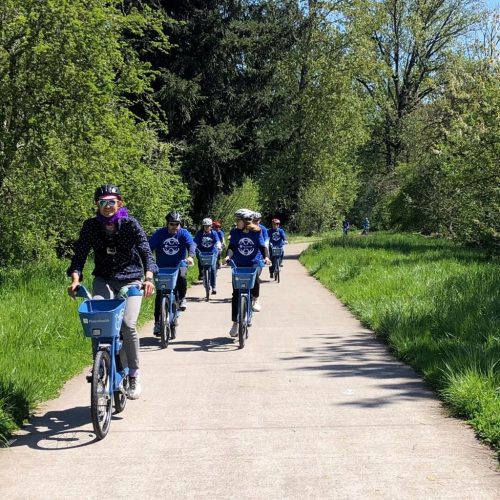 JUMP operates Eugene’s latest addition of sustainable transportation. PeaceHealth Rides offers 300 public bikes available 24/7 to pick up and drop off at hubs all around Eugene. A collaboration between the City of Eugene, Lane Transit District, University of Oregon, and PeaceHealth, will provide an active transportation alternative making biking in Eugene easier than ever.

When Eugene received the grant for a bike share program back in 2015 the plan was to open by this Fall. Last week the City of Eugene, Social Bicycles, and other partner agencies, Lane Transit District (LTD) and the University of Oregon, announced that the launch date has been extended to the Spring of 2018. The move was approved by ODOT, the grant agency for the $909,000 ConnectOregon funding that is being used to purchase equipment for the project.

Last Spring the partner agencies announced Social Bicycles as the contractor who will run the Eugene project. Since then they have launched a EugeneBikeShare site, hired station siting coordinators, collected input on station locations, organized a community “sounding board” and earlier this summer hired Lindsey Hayward as the General Manager.

Along with the announcement on the delayed opening was confirmation that a title sponsor has been found for the bike share system. END_OF_DOCUMENT_TOKEN_TO_BE_REPLACED

Via City of Eugene InMotion:

If you could not make the meeting or would like to provide additional input on where bike share stations should be located in the community, please log on to www.eugenebikeshare.com and follow the map instructions.  You can also use the Social Cyclist app (socialcyclist.com) on your smartphone to select locations.  Data will be collected on station locations until May 31st.  Eugene Bike Share will launch in fall of this year.
Please contact Reed Dunbar, reed.c.dunbar@ci.eugene.or.us with any questions.

An open house for Eugene Bike Share will be held in conjunction with the kick off of “May is Bike Month” next Monday, May 1st from 4:00 p.m. to 6:00 p.m. at the Broadway Commerce Center (44 W Broadway).

Participants will be able to interact with the bike share vendor and will be able to discuss possible bike share station locations. The open house will also preview the program for May is Bike Month and showcase events happening this summer for people who walk and bike, including Eugene Sunday Streets.

On May 1st, Social Bicycles, the vendor for Eugene Bike Share, will officially launch online content to crowdsource station locations and announce updates for the launch of the Eugene system scheduled for fall 2017. Social Bicycles is currently operating in 18 locations in North America including the recently launched BIKETOWN system in Portland, Oregon.

Beyond highlighting possible bike share station locations there will be free pizza, valet bike parking (in Kesey Square), and a raffle for a free bike share annual pass!
Join the Facebook event and spread the word.
For more information on Eugene Bike Share see www.eugene-or.gov/bikeshare

It’s about that time of year again, time to ride even more! May is going to be a GREAT month for biking in Eugene and Springfield. It’s a good time for fair-weather cyclists to roll those steads out of the garage and for everyone who rides bikes to celebrate together. With over 30 bike rides and events happening during Bike Month it’s the perfect time to try out something new! Usually ride for recreation? Try out commuting! Casual cyclist who only rides for errands? Try a longer recreational ride! Want to get your kids riding more? We’ve got events for you! Come ride with us in May.

For a calendar of Bike Month of the 30+ events click here. More events added as submissions come in. See how many you can do! Scroll below for complete descriptions of each event.

END_OF_DOCUMENT_TOKEN_TO_BE_REPLACED

Eugene has officially put out the call for an organization to launch a bike share system in the city by fall 2017. A “request for proposals” is live on the city website, and responses are due by March 8.

“The City of Eugene, in coordination with Lane Transit District and the University of Oregon, is interested in developing a modern bike share system from the university campus through downtown Eugene,” the posting reads.

The city has $1.2 million available to pay for the bikes and other costs of building and launching the system. The money comes from two grants, one awarded to the city and the other to University of Oregon.

Eugene Associate Transportation Planner Reed Dunbar, who put together the request for proposals, has said the city is trying to cast a broad net for ideas on what the system would look like and how it would operate.

While older forms of bike share rely on fixed stations where users pick up and return bikes, some systems now use “self-locking” bikes that can be left anywhere within a certain service area, more akin to the Car2Go system that operated for a while in Eugene.

The scope of bike share in Eugene won’t be known until a proposal is selected, but a feasibility study (15MB PDF) completed in 2014 that led up to the grant and current request for proposals suggested a phased implementation focused on the university and central neighborhoods.

The city’s current call for proposals also asks that they “identify a business plan to fund operations” of the system once it is built and launched.

Typically, the ongoing operation of bike-share systems is funded by some combination of user fees, government subsidies and sponsorship deals. New York City’s Citibike, for instance, is sponsored by Citibank. And Nike recently signed on to sponsor the upcoming Portland bike share.

Eugene plans to put out a separate request for proposals for sponsorship of Eugene bike share.