Pulled this off the Willamette River Bridge site and it’s worth passing on to remind folks to be careful, courteous and safe out on the paths, especially with all of the construction going on.

Speaking of construction, the Fern Ridge path section near the fairgrounds has opened up- it’s nice! Would post a photo if I actually had any time to take and upload one =).  They have moved the construction farther west now and are working near Chambers and the Blue Heron Bridge. Last night when I passed by they were done for the night and the fencing was down and people were going around the construction.  I think that shows two things that need to be improved: 1) People need to obey signs and barriers, not doing so can not only be dangerous but also cause the project to take longer.  2) They really need to mark GOOD alternative routes for people. I don’t think they’ve done that very well on this project- there are alternatives but they don’t guide cyclists through them (like they would car drivers). They really need to place signs telling cyclists where to go for the alternative route, not just “Path Closed- Use 17th”.

Anyway, here is the information from ODOT regarding the I-5/Willamette River Bridge work:

Last week we received comments about safety on the path in the area just north of Knickerbocker Bridge where paths from all directions merge into one very busy intersection. If you frequently use the paths near the Willamette River Bridge project in the Whilamut Natural Area you are familiar with this area. I encourage you to use caution at all times and follow the signs and flaggers.

Good news is this intersection is temporary during the duration of the project. Currently, now it balances safety and ongoing mobility for path users and construction traffic. Land use regulations and discussions with key stakeholders were also considered when this configuration was created.

I encourage you to slow down and observe path traffic in this area so you minimize risk to yourself and other path users. We have recently moved construction fencing and added signage to increase visibility and awareness of this key intersection. Please be alert through the area and stay safe.

On another note, users of the Canoe Canal Path as it passes under I-5 should watch for concrete water dripping from overhead. The bridge deck was poured on Thursday, Aug. 12, and the dripping will continue for the next two weeks as the new deck dries.

With the heatwave this weekend, stay safe!

There’s a good amount of posts in the “To Do” file but the most important piece right now is to go over to the City of Eugene’s “Pedestrian & Bicycle Master Plan” website and give your input on the plan.  You can complete an online survey, use the interactive map, or simply send in a comment on problem areas, ideas for improvements, favorite spots, or other thoughts on how to make the Eugene infrastructure more bicycle and pedestrian friendly.

You hear people complain about ‘scofflaw cyclists’ all the time. Although I don’t think we’re going to get those who are totally blowing through stop signs, red lights, and crosswalks with pedestrians into a BikeEd class, I do think it’s a great idea for all cyclists to learn a bit more about good riding skills. Even those who consider themselves “experienced cyclists” would benefit from a League of American Bicyclists class.  Being a well-educated rider doesn’t only makes you a shining ambassador for all road users;  it also gives you some great skills and puts to words what you might already be practicing so that you can easily pass that information onto friends and family who might be interested in riding more.

Luckily, here in Eugene we have a great bike education program going through the Greater Eugene Area Riders (GEARs).  Classes are cheap at only $10 for the full 9-hour “Street Skills 101” class and $5 to free for the 3-hour “Traffic Skills for Families” class thanks to sponsorship and fundraising efforts by GEARs and its members. These “Confident Cycling” courses offer beginner and advanced riders loads of great information and they put more responsible, educated, confident, and skilled riders on the road.    Why not be one of them? Register now. Want to know what it feels like to ride a cycletrack?  Come out to tomorrow’s “Cycletrack Demo Day” to find out. 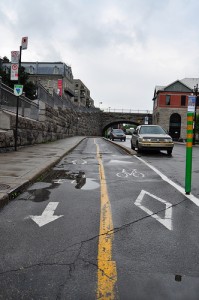 As reported previously, the City of Eugene is considering a cycle track as one of the design options for an Alder Street corridor update happening this year (between Franklin and 18th Ave.). This new corridor could allow cyclists to access the river path more conveniently from the south side of town.  Along with a two way bike lane and some other design options, the cycle track is the design most people are the least familiar with but that has the greatest potential to increase the comfort, safety, and usage for cyclists.

Since cycle tracks are a new concept the City is setting up a demo so that community members can get a feel for what it’s like  riding a bicycle on a 2-way cycle track facility.  Come check it out;  bring your bike and helmet and give it a ride!  The paint will be down for awhile so if you miss tomorrows demo swing by some other time to check it out.

It’s right before the Pedal Powered Workshop happening at Agate Hall, so stop by on your way there.

This Thursday was Project Homeless Connect, an event where community volunteers spend the day helping hundreds of members from the homeless community in receiving critical services including free medical exams, dental checkups, vision care, hot meals, haircuts, services support, and much more, including  bike repair.  At this years event about 15 volunteer mechanics, several intake volunteers, CAT Valet Bike Parking Volunteers, City of Eugene Transportation staff and Project Homeless Connect coordinators helped over a hundred guests get their bikes tuned up, fit a free helmet, or simply watch their bikes (and gear) while they received other services.

Last year the event served 1,548 guests. Organizers anticipated an increase in attendance as Lane County’s homeless population is rising. Results of the 2010 annual one-night homeless count revealed that 3,971 people were homeless at that time. Of those homeless, 607 were families.  Many use bikes as their main transportation. END_OF_DOCUMENT_TOKEN_TO_BE_REPLACED

The long talked about option of “Bike There” on the Google maps site has been launched!

In conjunction with the 2010 National Bike Summit being held this week in Washington D.C., Google announced the beta version of bike directions on their popular mapping website. They will be making the official public announcement tomorrow morning.

I just tried it the feature out and it seems to work great!  There is a specific layer that shows paths, “bike routes”, roads with bike lanes and even neighborhood cut-throughs.

Here is a shot of the feature: