I was having a conversation with a friend the other day and they said “hey, I was reading this year’s voters pamphlet and thought of you…”. Wait. First of all what cool friends I have that they spend their Thursday night reading the voters pamphlet. Second, why would I come up when thinking of this Novembers election?

So they continued “…there was the bond measure with the piece about the $1 million a year for bicycle and pedestrian projects and I thought ‘cool’ but then I was reading the arguments against and I was like ‘wait a minute, maybe it’s not a good idea’. I should ask Shane.”

Okay so not only does my friend read about the ballot measure she also reads the arguments for and against. And she thought about asking me for my thoughts. #WellInformedFriendsRock

So this is (basically) what I told her.

The arguments against boil down to two points that I’ve heard:

This isn’t a vote on how our bond funding system works. It’s worked well for us up to now to pay for these repairs and if we want to have a conversation about a different funding mechanism that keeps all our money local then we need to have that conversation in general as a community and writing off an important measure that is going to make our streets better for walking and biking isn’t the time or place. We’re working with the system we have here. That answer sucks for some people but like it or not there are times for dealing with the system you have and this is that time. These bonds have been good for walking/biking in the past and this bond is even better. We need it.

What about the gas tax? We get $3 million a year from Eugene’s 5-cent-per-gallon local gas tax, yet we have a backlog of needed street repairs of $92 million. Before we passed the two previous bonds we weren’t paying for street maintenance because other items like police, fire, social services, and other city services were taking priority in the general fund. Back then we had over $200 million in backlogged repairs. With those bonds we’ve turned the tide and are making a dent in maintaining the streets we’ve all paid for. This is a good and fair way to pay for our street maintenance and to leave other city services to work with the general fund budget.

Yes we should be asking for more. And we have. The Active Transportation Committee (ATC) wrote a letter asking to match the bond funding to our transportation mode share goals. If you look at our Transportation System Plan it calls for tripling our current walking and biking mode share from 2015 levels by 2035. This would mean 50% of our trips made by walking/biking.  To get there we need to do things very different and that includes in our funding.

However, we are working within our existing system and we can’t expect to make the leap in one giant leap. If you look at where we have gone in these bonds we have raised the percentage of these funds from about 3% of the bond going to multi-use paths to 10% of this new bond going to walking and biking projects. This bond will get us $1 million dollars a year going to active transportation projects. That’s like nothing we’ve seen in Eugene and the city uses these funds to match other grant projects like Safe Routes to School and state and federal funding of active transportation projects.

Plus we’ve come a long way with city staff in implementing projects that make the streets safer for all road users when a general repaving project is done. So even those streets that are receiving the larger pot of funding in the bond are improved for people walking and biking. Out of the general bond funds they are getting new marked crossings, marked bike lanes, and street designs that can reduce speeds. Not to mention the nice and smooth pavement we can all enjoy including our skateboarding brothers and sisters (who, by the way, we should be working with to make skateboarding legal on our streets!).

Okay, I didn’t really say all of that to my friend, but you know it was basically that and I think I got those main points across. 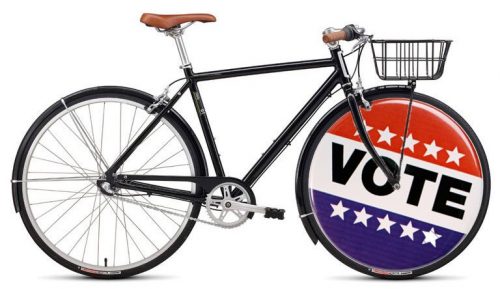 So basically, vote YES for this bond. We need these funds to help keep moving Eugene forward in our goal to get more people walking and biking. Yes we should be asking for more for active transportation and trying to find creative ways to pay for that, so let’s have that conversation too. Seriously, I want to get people together to talk about how we can do that. Let’s work to find the funding that will get half of our trips made by walking and biking. The first step in doing that is to get this $5 million dollar piece passed and get some more good projects put in now to keep us rolling as we talk about how to get more.

*The more casual writing style in this post is brought to you in honor of Mike Seager, the founder of WeBikeEugene, whose fun writing style is sorely missed as he focuses more on teaching and juggling these days. Come write some silly bike posts for us Mike 🙂

Talk about burying the lead. This is really the meat of it. This is what we have done in the past with these bond funds. Imagine if we didn’t have these funds and what a fight it would have been to get these projects done. Now imagine a nearly doubling of funding (from $516k a year to $1 million) and the dent we can keep putting into our active transportation network.  The second bond projects below are listed as the first section happening along with paving projects and the “discretionary” are those projects that happened somewhere besides where a ‘street repair’ project was occurring.

The first bond went to path repairs. Here is that list:

The second bond made improvements throughout Eugene in a variety of projects. Here they are broken down by year: