Sometimes it’s tough to keep up with all the transportation projects “in the pipeline” so I wanted to do an update on what projects were (or are being) completed this summer and fall, what is coming up in the next couple of years, and what projects could be priorities for the city to find funding for that will help us reach our transportation goals. I’ll be breaking those three sections out into different posts over the next several days. This first one will be about projects completed this year. The next post will be about projects coming up in 2018-2020. The final post will be about what we need to be working on to get us to our future goals. 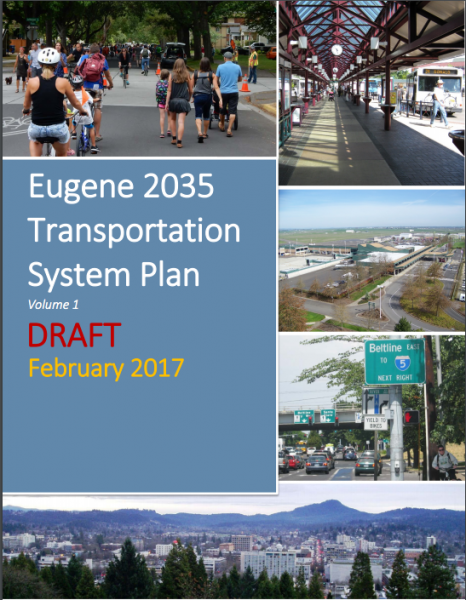 Those goals are laid out in the Transportation System Plan (TSP) that was adopted by the Eugene City Council on June 26, 2017 and it calls for a tripling of our active transportation mode share by 2035.

So how are we going to get to that lofty goal? A good timeline some are using is 2021, as that is the year that Eugene will be hosting the 2021 IAFF World Track & Field Championships. It’s a pretty big deal for “Tracktown USA” as it is the first time the event has been held in the United States. The 2017 Championships were held in London and the 2019 Championships will be held in Doha, Qatar. With nearly 2,000 participants representing as many as 213 different countries from around the world it will be a time that Eugene will be on the world stage and it could be a great time to highlight how great our city is for healthy, active transportation.

So, let’s look first at what happened this year for active transportation projects that will start getting us to those goals.

New I-5 Path to the North- See Richard’s story earlier this summer about the new I-5 path near Beltline that will add a great connection to North Eugene and create a connection to the existing path that goes under Harlow and increases separation and safety. When these paths are complete cyclists will be able to get from Chad Drive, north of Beltline, down to the river path system with only a small section of on-road travel on South Garden Way.

Commerce Street Connector Bridge– As part of the West Eugene EmX project this bridge will connect the Fern Ridge multi-use path with Commerce Street and the westernmost West EmX station (near Beltline on West 11th). This project wasn’t originally in the West EmX plans but local advocates pushed LTD to make it a part of the project as whole neighborhoods could be connected to the new Bus Rapid Transit lines through this crossing as well as make an important connection for cyclists to the retail area around Commerce Street.

This project will actually include two steel truss bridges (one 135 feet and one 60 feet) to cross the Amazon Creek and wetland area. The funding for this project comes from a ConnectOregon III grant.  This project wasn’t completed in time for the opening of the WestEmX line but should be completed by October 31st.

WestEmX- Besides being the next major leg of our great Bus Rapid Transit system the WestEmX project was one of the largest pedestrian improvement projects the city of Eugene has ever seen, with 5 miles of new and improved sidewalks, 3 multi-use bridges, 700 curb ramp rebuilds, and other improvements like street trees and plant beds to create  a buffer between pedestrians and street traffic that should make walking along West 11th better than it was before.

It should be noted that the West EmX project also made some things worse for pedestrians and cyclists. By not taking a travel lane from motorized vehicles but expanding the street width instead, the project made the crossing distance at intersections much longer than before. While increasing the width of 11th at the Fern Ridge underpass they also made an already poor under-crossing even worse with a longer underpass that is lower in height and floods more often. There were also missed opportunities, such as on Garfield Street between 11th and 7th, to close a gap in the bike network that is in our Transportation System Plan. It also took several community input sessions for LTD to recognize the importance of the multi-use bridge connections over Amazon Creek and work towards finding funding for these.

There were a few projects that were completed this Summer and Fall that came from the 2012 Pavement Bond Measure. Here’s a sampling of what has been completed and some that are still in progress.

Rectangular Rapid Flashing Beacon (RRFB) on Irvington Drive at Revell Street near Spring Creek Elementary School. This location had a pedestrian refuge and marked crossing before but installed the RRFB to make it a better Safe Routes to School crossing.

Enhanced school zone speed limit signage near the Village School on Willamette Street. When The Village School moved from their old location near the Woodfield Station to their new location on 35th between Donald and South Willamette there were several improvements that were needed to bring the location up to standards for traffic control around a school site. This summer the first piece on Willamette was installed; a new school zone “when flashing” sign was installed.  This Fall the school should see a new marked crossing on Donald Street as well and they are hoping for an improved pedestrian crossing on South Willamette sometime in the future as well.

Complete striping changes on 24th Ave between the Amazon Parkway and Hilyard Street including a buffered bike lane and marked cross walks. This is a very exciting improvement for me since I worked hard with the 4j School District and the City of Eugene to make this improvement as part of the new Roosevelt Middle School that was completed last summer.

There was an administrative order to remove the on-street parking last year and there was an an appeal to that order from someone from the public. A hearing official eventually ruled that the city did their due diligence for the parking removal. The original design called for a physically separated bike lane on the south side of 24th (to help discourage student drop off, reduce speeds and increase the comfort level for all cyclists) but the school district didn’t want to use Safe Routes funds for a type of infrastructure that hadn’t been installed in Eugene before. The city didn’t have the funding to install the separation so for now there are buffered bike lanes. While the cones were down at the beginning of the school year it was a great comfortable facility. City staff has expressed interest in putting in permanent separation at a later date (at least as a trial) so hopefully we’ll see that happen when there is some funding for it.

A few new signs have been installed on the West Bank Path to provide improved information about street and path connections. These should help with figuring out where on the path you are and what streets connect up to it.

Stay tuned to WeBikeEugene for an update on the next pavement bond measure that will be on the November ballot and what it holds for active transportation funding (good news).

13th Avenue Bike Lane Gap Fix- In 2014 the City of Eugene had a repaving project on 13th Avenue that installed one of the largest stretches of new bike lanes in the city in over a decade. The city removed parking and installed the bike lane from Chambers Street to Washington Street, including large sections that were buffered. However, this left a gap of no bike lane between Washington Street and Jefferson Street, where the previous bike lanes on 13th began. For that two block section they left the on-street parking on the south side of the street and laid down “sharrows” that required cyclists to claim the lane before the bike lanes picked back up again at on the East side on Lincoln Street.

At the time the Traffic Engineer for the City of Eugene was Tom Larsen, who, it was discovered later, was practicing without a license since 2008. This past year Matt Rodrigues was hired as the Traffic Engineer for the city and he made it a priority to fill this gap in the system. City staff also noted that Wagon Works, an auto-repair shop, initiated communication about filling the bike lane gap and that when they met with other local retailers in the area, including Hot Mama’s Wings and Soriah’s, there was support for the project.

The striping just went in the other day and you can see both a video of that new connection and some pictures of cars parking in the new bike lane on our Facebook Page. The city is planning to install cones along the bike lane buffer to help educate people on the new infrastructure change.

This small gap fill is symbolic of a larger shift that has happened at the City of Eugene since Matt Rodrigues has taken over the Traffic Engineer position. It may be the first time in the cities history that the lead Traffic Engineer is a daily bike commuter and it’s certainly the first time in a couple decades since we have seen leadership in that position that is working towards positive change for active transportation and safety improvements. There is a lot of work ahead for the city to make a major mode share shift but if this summer is any indication it’s going to be a bit easier for that work to happen with someone like Mr. Rodrigues in that position.

Two Way Conversion for Lawrence– We don’t have a lot of information about this change but we know that the City of Eugene is planning to convert Lawrence Street from one way Southbound to a two-way street this summer (from 13th to 7th Avenue). It will make connections to and from the new bike lane and North-South travel on the low-traffic volume street of Lawrence a good alternative for cyclists who can’t really use Washington or Jefferson streets.

Another piece of the Lawrence Street two way conversion and the 13th street improvements will be a new marked crossing on 13th at Lawrence that will be installed next summer.

Along with on-street improvements there were two new school buildings that were also completed this summer and both of them brought some improved walking and biking infrastructure.

The other major improvement completed as part of the Safe Routes to School improvements during the rebuild was a brand new sidewalk connecting the school to River Road. Previously the school was only connected to it’s namesake road by a small shoulder and dirt path for pedestrians. Through work with Lane County, the City of Eugene, and a private landowner the school district was able to finally make the connection from River Road to the new El Camino del Rio School site!

Arts & Technology Academy– Previously if you were using the multi-use path system going through Westmoreland park (connecting from the Fern Ridge Path via the 18th Avenue overpass) you would have to go through the parking lot at ATA to get to 22nd Avenue at Polk or Fillmore. The new path system provides MUCH better connections without passing through the parking lot and connects path users to the new and improved school bike parking, to the path coming from Polk, and to the multi-use path installed two years ago from Chambers to Fillmore on 22nd.

So overall it was a pretty good Summer and Fall for active transportation projects in Eugene. Just wait and see what’s in store for 2018/19….stay tuned to WeBikeEugene for that story in a few days. In the meantime get out there and ride some of this great new infrastructure.