This summer there’ll be a new bike working the streets, parks, and events of Eugene, and for those who love their coffee it will provide a special treat.

Wheelys Café Oregon — essentially a pedal-powered, mobile barista cart — is a new business started by Becky and Jason DeAngelis based on the successful Wheelys Indigogo project.

Wheelys, based in Switzerland, now has more than 200 of these special café bikes in over 45 countries, but the DeAngelises are only the second in Oregon to purchase a bike. Another operator in Beaverton is also just getting started. There are about five bikes operating the United States now, with others attempting to open but dealing with permitting and regulation issues. 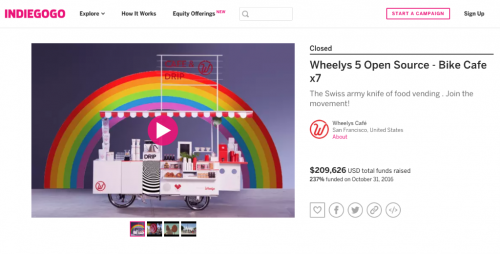 The DeAngelises purchased their bike last summer and though they had hoped to open by this past fall, preparations and permitting have taken some time. They now hope to do a “soft opening” this Spring and be ready to share the coffee-bike love by this Summer.

The DeAngelises moved to Eugene seven years ago from Wisconsin and have been small business owners in the past. They were looking for a new business when they discovered the Wheelys project.

Jason said that it took him a couple days to read about it when Becky originally sent it to him, but that once he saw it he thought it would be a perfect fit. They purchased a fourth edition of the bike but were able to upgrade to the fifth edition, the most current version offered by Wheelys, and it arrived early last month.

They are still working on the bike, but it already has some cool features, including:

The DeAngelises are committed to buying local and are aiming to offer at least 90 percent of the café items as fair trade and organic. They have not decided on a coffee roaster yet but are looking at local roasters in Eugene and throughout Oregon as well as the possibility of using the Wheelys brand of specialty coffees.

They will offer some food as well, starting out with basic items such as fruit, granola bars, and maybe even croissants or other pastries but will be mostly focused on coffee initially.

As a previous cargo bike courier and barista myself, I had dreams of owning a coffee bike so I’m especially excited to see Becky and Jason out around Eugene selling great coffee by bike!

They are on Facebook and Instagram and are excited to get out this summer to start showing off the bike and the coffee so keep your eyes peeled. We’ll post an update once they are out and about.