After a spike in 2015, the City of Eugene reported in this month’s InMotion newsletter that the Eugene Police Department (EPD) “registered more bicycles and had fewer bicycles reported stolen in 2016 than in 2015.”

That’s good news, especially since Eugene has been recognized as one of the worst places in the nation for bike theft.

However, it’s worth noting that we haven’t made “Kryptonite’s Top 10 Worst Cities For Bike Theft” since 2006 and our high theft rate also correlates to one of the higher per-capita bike ridership numbers in the nation (8.7%), second only to Boulder, Colorado (10.5%) for medium-sized cities (population of 100,000–199,999).

Most readers have their Eugene bike theft story, we have a “stolen bike listings” page, and we even know the worst spots in town thanks to a report last year from EPD.

But what are people and organizations doing to reduce bike theft in Eugene? Let’s look at some of the numbers and what people can do to reduce the chances that their bikes are stolen. 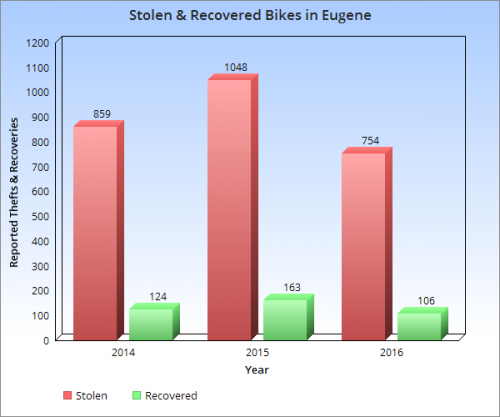 The number of bikes recovered and returned to their owners is related to how many bikes that are registered, and we also have some of those numbers from the City of Eugene and the University of Oregon, who have always had different bike registration programs.

The University of Oregon Police Department has 9,409 bikes registered in their in-house database but has recently (in early 2016) switched to the new UO Project 529 registration system that allows for online registration via a website or app as well as a social media and crowd-source monitoring system. Since that point they’ve registered 1,451 bikes in the Project 529 system. The university said that getting numbers for recoveries is more difficult due to the way they are recorded as a recovered article and are not specific to bike theft. 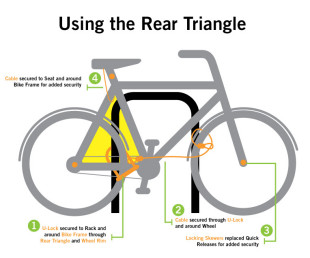 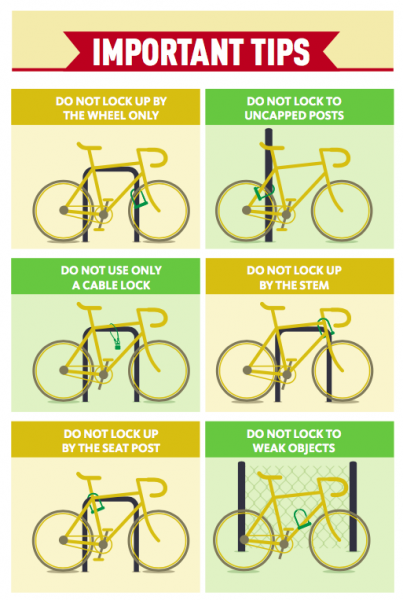 Here’s the PSA portion via the City of Eugene…Register your bike!!

Registering your bicycle can greatly increase your chances of recovering it, if it is stolen.  You can register your bike for free with EPD (if you are a resident of the incorporated area of Eugene). University of Oregon students should register their bicycle with the U of O Department of Parking & Transportation and registration with them is required for all bikes on campus. For all others, various National bike registries are available, such as bikeindex.org or Project 529 (who recently merged with National Bike Registry).  Like EPD & U of O, they’re free, convenient and easy to use. Only one registration per bicycle is necessary, so there is no need to register with EPD if you already registered your bike with U of O or a National registry.

To report stolen bicycles 24 hours a day (which should be done immediately), call 911 if the crime is in progress, call EPD Non-emergency at 541-682-5111, or go online to our website to report it.