I’ve often thought there are a lot of ways that people on bikes benefit from being part of “Track Town USA”.  People running and biking are using “active transportation” and whether along our streets or on our off-street paths we all want respect out on our public right-of-ways and whether we’re out getting from point A to point B or out recreating we all win with better personal health and a more livable community.

This week the International Association of Athletics Foundations (IAAF) World Junior Championship has arrived in Eugene. The six-day meet, which is coming to the U.S. for the first time in history, will be held July 22-27. It features competition between the world’s best track and field athletes under the age of 20. There are more than 1,500 athletes from 175 countries represented. I’ve already seen some of them out exploring Eugene, walking along the river and even riding bikes around.

Part of the events goals are to reduce emissions by becoming the first carbon neutral IAAF championship event.  All event operations at Hayward Field will be powered by 100% carbon free GreenPower from EWEB and all event travel emissions in Oregon will be neutralized through a third-party carbon offset provider. 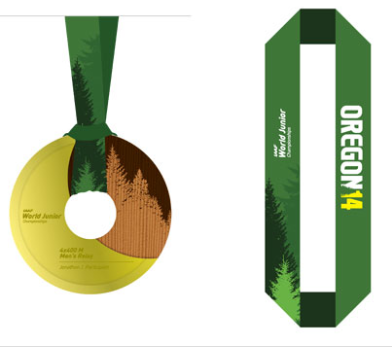 Athletes and fans will be engaged in sustainability through a “We Can!” booth at the event, where they can participate in a Sustainability Scavenger Hunt and earn a commemorative Oregon 2014 medallion made from reclaimed wood from local sources. The booth will also be powered by Pedal Power!!

As the  City of Eugene’s Waste Prevention Manager  Ethan Nelson puts it, “a majority of people pay attention to sport, it is where our highest ideals of our self and community are embodied. When we collectively work together to create an ‘ecosystem’ that carries an event’s activities out into the community and vice versa, we are really creating a better world for future generations.”

So what the heck does this have to do with biking in Eugene?! Well one of the stops on the Sustainability Scavenger Hunt is the University of Oregon Bike Program at the UO Outdoor Program Barn (at 18th & University) and they need some volunteers!  They’ll be doing flat fix repairs and some interactive bike crafts and could use some help from the local bike community. It’s a great opportunity to see the action around Hayward field and introduce people from around the world to our awesome cycling scene.   If you’d like to help out please email Briana (borr (at) uoregon (dot) edu) and let her know when you can lend a hand.