This is a guest post by Rob Zako, Executive Director of BEST (Better Eugene Springfield Transit), whose goal is educating the public about and advocating for a regional transit system that fosters prosperity, social equity, and a healthy natural environment.
———-

Did you miss international expert Gil Peñalosa yesterday at the “Connecting Communities” conference?

Gil is the executive director of the Toronto-based nonprofit 8-to-80 Cities. Their mission is simple and compelling: Everyone has a right to get around safely, quickly and conveniently. This includes 8-year-old children—maybe your own children or grandchildren—who are too young to drive; and people 80-year-old seniors—maybe you, if not now then in a few years—who have lost the ability to drive. If the young and old can get around, then everyone can get around. Making a community that works for everyone is democracy, it is equality, it is respect.

Gil talked about a prosperous economy: According to the AAA, a family that can get by with one less car typically saves $9,000 a year—money that can be spent locally rather than going to car and oil companies out-of-state. He talked about reducing traffic “accidents”: Worldwide, the number of pedestrians killed in traffic crashes is equivalent to five plane crashes each day, day after day—we should be outraged! In response to an “epidemic” of unacceptable traffic deaths, some in Portland are calling for “Vision Zero,” i.e., planning to eliminate all traffic deaths. He talked about improving public health: One in three Americans is obese and at greater risk for a wide range of related diseases. He talked about having a cleaner environment. Most importantly, he talked about designing cities to promote sustainable happiness.

Finally, Gil channeled Phil Knight: “Just do it.” Don’t spend a lot of time planning 50, 20, or even 10 years in the future. If you can’t make it happen in the next 5 years, it’s because you don’t really want. In his first 30 days as mayor of Chicago, Rahm Emanuel installed protected bicycle lanes on busy streets where it had previously been too dangerous to bicycle. He said that the challenges we face are really opportunities, and that usually what we lack isn’t the technical know-how but the political will.

Gil gave lots and lots of examples from all over the world, with a whirlwind, energetic, inspiring PowerPoint presentation that included hundreds, maybe a thousand, images good and bad from all over the world: from Toronto, Vancouver and Sudbury, Canada; from Bogotá, Columbia; from Europe; from Asia; and from cities large and small in the United States.

Stay tuned as BEST schedules future conversations where YOU can discuss the role of transit in our community and how to make it happen. Does your organization or group want to join the conversation?

Tell us what you think… 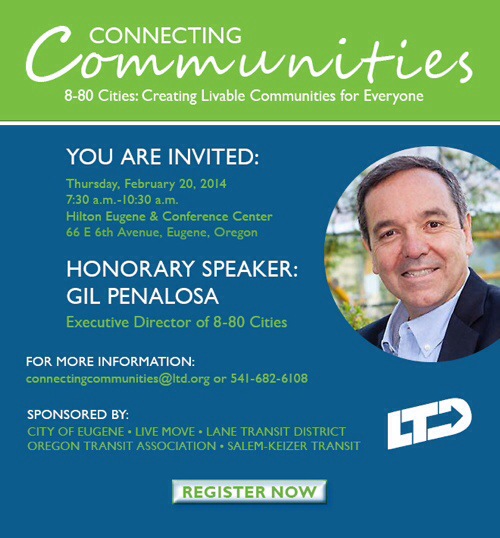