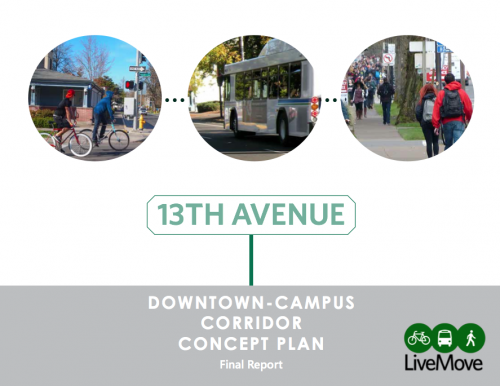 Over the past few years, the West University neighborhood, downtown Eugene, and the UO have changed significantly. With more students enrolling at the UO, the demand for housing near campus exploded and the trend continues. The 13thand Olive Apartments and a new development on Patterson Street and 13th Avenue are two of the latest housing developments to break ground on 13th Avenue, bringing more than 1,200 additional residents to the corridor. In addition, downtown Eugene is experiencing a renaissance, with several new dining and entertainment options opening in the past year with more still to open. This increase in student housing density, coupled with the anchors of a resurgent downtown Eugene and a growing UO campus, places an increasingly large burden on 13th Avenue.

Thirteenth Avenue serves as the primary and symbolic connector between campus and downtown. The street is one of Eugene’s busiest bicycle and pedestrian routes. This is not surprising, as13th  Avenue serves as one of the gateways to campus and 79% get to campus by alternative transportation modes, including walking, bicycling, bus, or carpooling.. Only 16 percent use a car to commute to campus.

With the non-car traffic on an already busy 13th Avenue likely to grow, and an increasingly-popular downtown and new housing options drawing bicyclists westward, the LiveMove ByDesign team believes the demand exists for a two-way cycle track on the street to replace the current eastbound bicycle lane. In this report, we have demonstrated that every day hundreds of cyclists already go westbound on 13th Avenue, but do not have adequate facilities to do it safely. Furthermore, space can be repurposed from underused parking spaces and overbuilt car lanes to increase capacity and accessibility for bicycles.

Throughout the 2012-13 academic year, LiveMove – the multidiscipline UO transportation and livability group – established “LiveMove  ByDesign” to provide students with a hands on, real-world, applied project. The group developed after LiveMove members identified problems with roadway safety and access on 13th Avenue. The student conducted a corridor study, case studies of practices used around the world, and developed a preferred design alternative for this corridor. 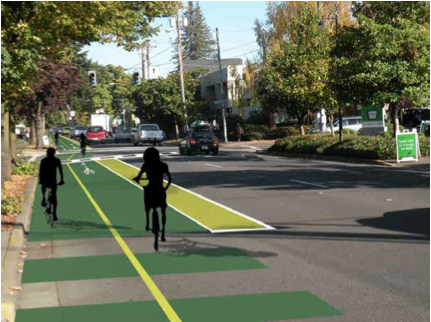 ByDesign’s proposed design offers a safe, easy-to-understand link for cyclists traveling between downtown Eugene and campus. The plan does not require expensive techniques to build, transit can operate largely as it does now, and no additional right-of-way needs to be acquired. Paint, flexible plastic poles, and a few traffic signals are all that is required. We recommend that this proposal be installed first as a test pilot for one year to assess its impacts, before full implementation or full removal. Additionally, its recommended that the implementation coincide with an educational and enforcement campaign in order to best answer questions and ensure proper use by all roadway users.

The ByDesign team did its homework when evaluating the current conditions as well as the techniques used in the redesign. We feel confident that the assessment and proposal in this report represents a complete solution for 13th Avenue. This report serves as a strong starting point for any further studies, outreach, or plans conducted by the City of Eugene and the UO Administration. Thirteenth Avenue can be safer and better for everyone, and the LiveMove ByDesign team is proud to offer this report as our plan to make that change happen.