This just in from the City of Eugene (emphasis mine):

Final approval was recently given by FHWA to construct the West Bank Trail Extension Project. This project will provide a shared use path connection between the Santa Clara area and the riverfront trail system south of Randy Pape Beltline. The project extends the existing West Bank Trail shared use path north along the bank of the Willamette River near the Wastewater Treatment Plant, under Randy Pape Beltline, and then west along the north side of Division Avenue, terminating at Beaver Street. This project includes path lighting, an undercrossing bridge which provides grade separation between path users and trucks entering and exiting the major Knife River driveway, and a retaining wall along the Willamette River. This project is scheduled to begin construction this winter and be completed in fall 2011.

This is a really important connection for this area.  As reported by the Eugene Bicyclist this summer in his report on “Eugene’s Meanest Streets,” this is currently one of the worst areas to ride;  getting around Beltline (aka Randy PapÃ© Beltline) can be a real pain and dangerous.  The unfortunate piece is that the County had the opportunity to make improvements to Beaver/Hunsaker in the last round of STP-U funding (a pot of flexible transportation dollars). It was originally in their plans for improvements, but was mysteriously taken off so that road will remain an unimproved road with no shoulder, sidewalks, bike lane, or other improvements that would make it a “complete street” for all road users (see story on GEARs site for more details, County section).   This great path will dump riders onto a road on which they will have to claim the lane in order to be truly safe, and with a busier street like Beaver/Hunsaker, that can prove unpopular.

Here is a map of the area that will be improved this winter and summer.  The first phase of the project will be an undercrossing of the Knife River sand and gravel driveway, with path construction and light installation most likely happening in the summer.  There are some really great projects coming down the pipe for cyclists and pedestrians.  I hope to include a few reports in the next few days on those other projects as well. 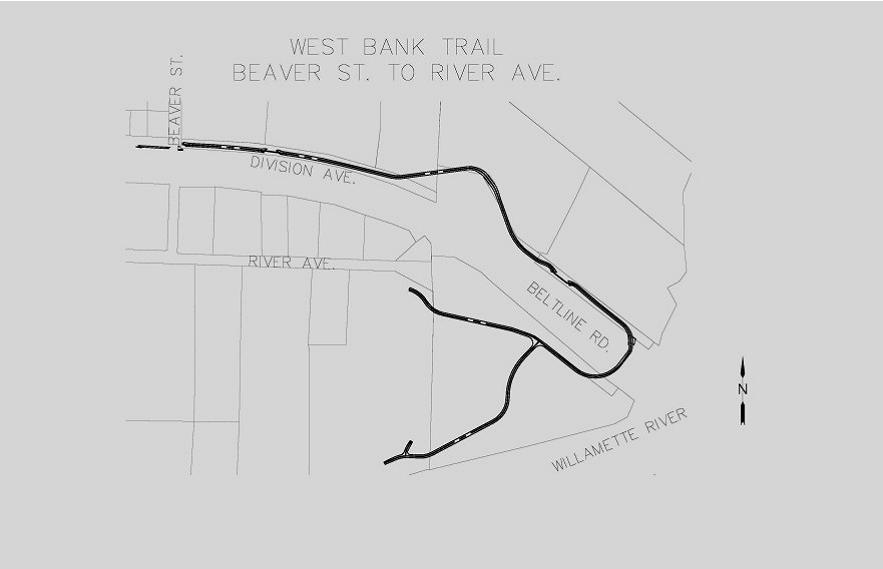