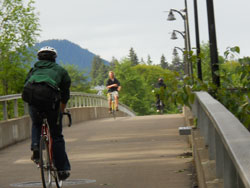 This year I finally volunteered for the City of Eugene’s annual Bicycle and Pedestrian Count (I had seen the notice in the GEARs emails for years now, but hadn’t been able to get my act together before). The data gathered during these counts helps the city understand the non-motorized traffic patterns at various strategic intersections on streets and bike paths throughout Eugene. With this information, city engineers can prioritize repairs on roads & paths and otherwise make life that much easier for cyclists and pedestrians.

The lunchtime training session showed the process to be a little more complex than I had expected. Volunteers don’t just sit in a lawn chair and count the number of people who go by. First we categorize by bike/not bike (the latter category includes folks on foot as well as anyone using a wheelchair, stroller, or skateboard).  Then we note the direction they are coming from when they approach the intersection, and whether they turn right, turn left, or proceed forward through the juncture. We start a new form every half-hour to keep the data from getting too cluttered.  The intersection I signed up for (which is along my commute so I could count on a weekday morning and still make it to work on time) happened to be a complicated one that involves two forms side-by-side per half-hour. The extra challenge had me that much more excited! Now all I needed was a sunny day to get started.

As we all know, sunny spring days are a precious commodity in Oregon, and this particular spring has been working hard to make up for a dry winter. But the instructions for the bike counting do specify sunshine as part of the equation. I found myself reading the weather reports obsessively and staring out the window in the morning, trying to guess whether “generally overcast with streets currently dry and not as gloomy as it could be” would be close enough to “sunny” for the purposes of this experiment. Finally, towards the end of May, a bona-fide sunny blue morning greeted me when I rolled the trash cans to the curb. The weather report still grimly reported a 100% chance of pouring rain, but I seized the window of opportunity and flew out the door with my intersection maps and aerial photos.

The short version? Bike/ped counting is a blast, both for the scenery along the river paths, the fun of watching folks go by, and the challenge of getting everyone’s travel patterns marked down accurately. The long version? Here are my stream-of-consciousness notes from staking out the north side of the Autzen Bridge (at the cloverleaf where it joins the North Bank Path) for two hours on a (temporarily) sunny spring morning in May.

Bike out to the bridge just in time. Make mental note of the trajectory of the cyclist just in front of me (Do I count myself? I don’t think so. How does the Heisenberg principle apply here?).  Set up my cargo bucket (which doubles as a comfy stool) at a convenient location where I can watch the bike paths as well as the bridge traffic. My first choice of stakeout location has a pile of barf, so I scoot a few feet away. Mosquitoes! Slap slap. A scramble to start counting the passing bikes while getting all the forms filled out correctly. Flustered, forgetting the date, worried my handwriting is too messy…Ugh, need to be better prepared next time.

Settled in, maps and diagrams all organized on my lap in the most intuitive pattern for counting. Impressed by how quiet it is along the path. Bird song, murmur of river flowing, distant static of freeway (but the river is louder). Sound of bike tires on pavement with the soft whirr of chains against cog teeth. I can pick out towhee calls distinctly among the mixed chorus of bird songs. Very soft padding of a runner’s shoes on the path. Jingle of a dog’s collar as an occasional treat. Click of gears shifting on the approach to the bridge. My feet are going numb from sitting on my plastic bucket, try standing up for a while. A Bike Friday whizzes by, cyclist wears screaming yellow gloves. Friendly smile from another cyclist whose hoodie is pulled up to keep the chill off his ears. Steady flow of bikers and runners and walkers, but nobody stopping to chatâ€”it’s a complex intersection, and folks have places to be. Another Bike Friday goes by, this one yellow & green. I feel like a cat: eyes open to any hint of motion, or the sound of a twig snapping, so none of these quiet travelers go by uncounted. The noisier passage of a bike whose chain needs oiling. The silence of folks on an unhurried stroll, especially compared to the firm footfalls of runners. A single “ding” from a bell. A big warm smile from a runner wearing earphones. And a surprising “Hi, Katura” from a friend who whooshes by on his blue bike. (He turned left).

Family of three goes by on an awesome Burley tandem. Buzzing song of a wren. Honk of a Canada goose, harsher than the dominant tweeting bird chatter. Wishing I knew bird songs better, but that would just be one more thing I am trying to keep track of! Dahon folding bike goes by, guy has a very cushy saddle. A funky foot-forward cruiser that’s having some trouble shifting. What do I mark on the sheet when a bike turns around, having evidently forgotten wallet/phone/lunch/homework? First recumbent of the day goes by, followed by a semi-recumbent Giant Revive with scraper-bike spoke decorations (I love this town.). 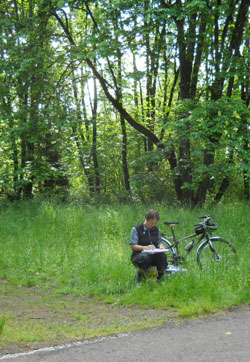 Standing up again to prevent more numb feet. Next time I should pack a comfy folding stool. I consider moving to the park benches but worry I’ll miss some of the traffic from that angle. It’s tricky to count everyone when they are coming from all sides! Another recumbent goes by with a trailer. And first skateboard of the day, distinctly noisy wheels. Pedestrian walking his boxer on a leash, the dog really wants to come over and say hi to me. Fellow comes over the bridge walking his cruiser bike…does he count as a pedestrian or a cyclist? Then he turns around and rides back the other way over the bridge, never quite entering the dotted line of my magic intersection. Man with boxer comes back the other direction, and the doggie still yearns to come say hi. Puffy white clouds are starting to drift in over the blue sky. Wail of an emergency siren in the distance, then back to bird song. Rumble of trash trucks from south side of the river.

Woman coasting on her bike at the slowest possible pace along the trail’s edge, examining the plants. She stops, turns around and walks bike, then the sproing of her kickstand as she pauses to pick some scraggly green herbs. She then rolls her bike off the trail into some trees…not entirely sure how to mark that one down. After a few minutes, the plant-gathering cyclist emerges and rolls into my stakeout-area to inspect the grasses. “Whatcha collecting?” I ask. “Oh, I teach systematic botany at the university, so this is quiz material. And what are you doing?”  “Counting bikes and pedestrians,” I reply. She nods knowingly: “Bet I’ve thrown your count for a loop.”

Another Giant Revive rides by, a red one. Guy riding it looks happy, and his companion (on a “normal” bike) is vaguely familiar. A pack of 6 senior gentlemen pass through on a recreational stroll, two-by-two, very orderly. Folks glance at my paperwork, curious. Cyclist in a loud Hawaiian shirt tows a sleepy helmeted child in a trailer. I brush a lone gnat off my cheek and feel thankful that the mosquitoes have abated. Four pony-tailed ladies with one child in a jogging stroller and two golden retrievers pass by in a chatty clump. We officially count kids in strollers, but not dogs (though in my own mental notes, this has broken the pattern of one dog per half-hour interval). The smiling guy in the hoodie rides his bike back in the other direction, and it’s warm enough now that his hood is back down. A student-type with a backpack walking towards the universityâ€”fewer of them than cyclists, they move more quietly and, even with a confident and steady stride like this young woman has, they seem so slow by comparison to the runners and cyclists. I feel a sudden pangâ€”I used to be such a dedicated pedestrian, walking everywhere, finding treasures like lizard bones and colorful feathers along my route. Has cycling made me too rushed nowadays? A big flock of geese flies over, honking. Runner snorts like a horse, startling me as he approaches from behind. Breeze picks up and ruffles my papers. A friendly “Good morning” from a cyclist in an olive green helmet. The count officially stops at 9 am but I kind of want to stay longer, I’ve gotten so invested in making sure I mark everyone down. Should I count myself as I leave? What turning motion would get me to work most efficiently? Ding-a-ling of bike bells from a couple of  parents whose kids ride behind them on tag-alongs, plus one infant in a handlebar-mounted seat.

Cloud cover has built up pretty well by now. By the time I get my intersection diagrams, aerial photos, and giant library book (that filled in as a lap-desk) packed up, it’s past the magic window of counting time, so I guess I won’t include myself in the tally after all. Though cyclists and runners are still whooshing by, I turn off the data-collection brain and focus on getting to work on time.

Within 10 minutes, it’s pouring down rain.

3 thoughts on “Adventures with the Bicycle and Pedestrian Count”