This Friday, April 30th, the section of the South Bank Willamette River Path that runs under Interstate 5 between the Knickerbocker Bridge and Franklin Boulevard and the Glenwood area will be closed to all bicycle and pedestrian traffic from 7 am to 7 pm. The closure is part of the ongoing construction of the new I-5 Willamette River Bridge.

This is a rare case where there will probably not be a clear detour to get cyclists to a convenient alternate route. This particular stretch of the South Bank Path, pinned between the river and the railroad tracks, just doesn’t have many other options. If your ultimate goal is connecting from downtown Springfield to Eugene, the network of  North Bank Paths will connect up just fine (see below for the current state of the detours there). The direct connection from Glenwood to Eugene is another issue, though. Cyclists could skirt the south edge of eastbound lane of Franklin Boulevard, since a combination of gravel path and narrow walkway along that side of the road is passable with a mixture of riding and walking (Keep a sharp eye out for bikes or peds coming the opposite direction, since the westbound half of Franklin has no safe margin for non-motorized traffic!). Or, splurge on a little bus fare and treat your bike to a ride inside the EmX to get over the construction zone in style on Friday.

For users of the North Bank Path, the Canoe Canal Path as it passes under I-5 will continue to be closed through May 3.  Path users will be required to use the North Bank Path for any east/west passage in the Whilamut Natural Area between Eugene and Springfield during the closure.  With construction activity increasing daily, path users need to be aware of continuing delays on the paths which could last up to 20 minutes.

View a PDF of these delays.

Broadly speaking, the I-5 Bridge Replacement Project, which is scheduled to run from 2009 – 2012, has brought  a tangle of orange fencing and detour signs to the trails on both banks of the Willamette River where they pass underneath the freeway. As a commuter who normally bikes through this stretch of town 5 days per week, I have to say that the Oregon Department of Transportation has done a really great job of taking bicycle traffic seriously and investing time and resources into keeping these routes accessible and safe for the path users. The shifting web of detours on the North Bank Trails are very clearly signed, and the South Bank’s single path is monitored by anywhere from two to four flaggers during weekdays when the construction equipment is up and running.

Though waiting behind a hand-held stop sign for construction trucks or crane booms can add a bit of a delay to one’s ride, I have to say that I’m getting a little spoiled by having all these nice folks with walkie-talkies cork the truck traffic for me and tell me when it’s safe to go ahead (Can I have them follow me all the way to work, please, and keep working that same magic?). Even the fact that the signage along the river trails is the same as is used for normal road construction seems like an affirmationâ€”bikes & peds really are traffic, too, in the eyes of this project. 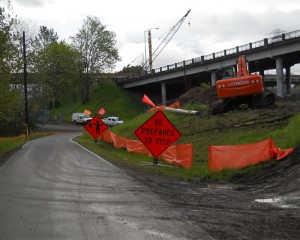 Besides, how often do you get to ride your bike through active construction zones? Giant robot arms yanking rebar out of the crumbling cement of the old bridge; huge cranes swinging teetering metal beams far above your head;  welders slicing sections off of giant pipes right along the path; long lines of cement trucks yielding the right of way to you as you pedal by…The 50 seconds it takes to pedal this stretch of path can be one of the most interesting parts of the day!

Stay on top of ODOT’s weekly construction updates on this project.

Read about the role of the Eugene Department of Parks & Open Space in assuring a peaceful interface between park users and the construction site.