This Thursday was Project Homeless Connect, an event where community volunteers spend the day helping hundreds of members from the homeless community in receiving critical services including free medical exams, dental checkups, vision care, hot meals, haircuts, services support, and much more, including  bike repair.  At this years event about 15 volunteer mechanics, several intake volunteers, CAT Valet Bike Parking Volunteers, City of Eugene Transportation staff and Project Homeless Connect coordinators helped over a hundred guests get their bikes tuned up, fit a free helmet, or simply watch their bikes (and gear) while they received other services.

Last year the event served 1,548 guests. Organizers anticipated an increase in attendance as Lane County’s homeless population is rising. Results of the 2010 annual one-night homeless count revealed that 3,971 people were homeless at that time. Of those homeless, 607 were families.  Many use bikes as their main transportation. 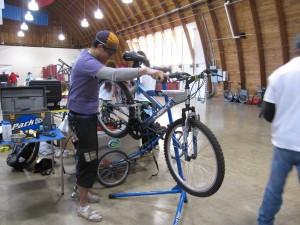 This was my first year at the event and I worked as a volunteer mechanic.  We had about 7 tables set-up where the mechanics spread out whatever tools, parts, and stands they brought. There was a wide range from the amateur garage mechanic with a mishmash of tools to the full-on professional mechanics with their nice spread of Park or Paul’s tools.  As the day progressed it was great to see how it all blended together with the main goal being to get through the long line of bikes that were brought in to be serviced.  We were provided a space, some lube, a truing stand, and some parts.  There were plenty of bells, spare tires and tubes but when we seemed to be lacking in brake pads, pedals, and some other items Andrew Alef, from Paul’s Bicycle Way of Life made the run to top off the donations for us (Thanks Andrew and Paul’s!).  There was a lot of sharing of resources and I think some of us ‘amateur’ mechanics learned a lot from the pros as there was a good amount of problem solving and working quickly with limited resources. 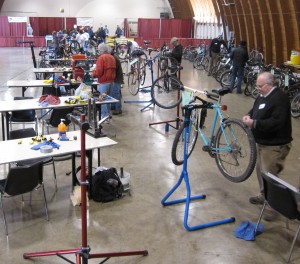 I was particularly interested to see the various types, set-ups, and maintenance of the bikes that came in.  These bikes were clearly utilitarian workhorses adapted to the needs and style of the people using them.  Whether it was a Magna department store bike or a reliable Trek hybrid you could tell these bikes weren’t just pulled out of the garage for a ride on the river path on a nice sunny day.  They were well used and well loved.  A lot definitely needed some serious work; broken pedals, wobbly wheels, missing brake pads, no brakes, missing cables, broken shifters, broken lots-of-things.  But what struck me was how well taken care of they were.  I think a lot of the people who brought their bikes in are probably pretty handy folks (you could tell from some of the ‘jerry-rigging’) but what they lacked were good tools and parts.  Another clear symbol of these bikes being important and respected ‘transportation tools’ was that almost every bike I checked had tires with were well inflated.  Contrast this to the family & kids bike education classes I teach and the number of tires we have to pump up before each class and you see the stark difference of people who ride everyday for transport and those who pull their bikes out once and awhile for a spin around the park.  People who use their bikes for transport know the importance of a pumped up tire!

This is a great event and I hope that next year we see even more mechanics (amateur and pro) volunteering and more donations of parts and resources (lights anyone?!).  We managed to make it through the nearly 100 bikes but we were doing a lot more ‘triage’ at the end and with more mechanics and parts we could really get these useful (and used) transportation bikes fixed up and working better for people who could really use the help.  Thanks to everyone who made it happen, from the organizers of the event to the people who brought us lunch (Thanks Laurie!). And a special thanks to the people whose bikes I worked on today- you’re an important part of this bike community and I hope you stay safe, well inflated, and as an old friend says ‘keep the rubber side down’.