The long talked about option of “Bike There” on the Google maps site has been launched!

In conjunction with the 2010 National Bike Summit being held this week in Washington D.C., Google announced the beta version of bike directions on their popular mapping website. They will be making the official public announcement tomorrow morning.

I just tried it the feature out and it seems to work great!  There is a specific layer that shows paths, “bike routes”, roads with bike lanes and even neighborhood cut-throughs.

Here is a shot of the feature:

For my commute to work it originally routed me on 18th. I assume it did so because it does have bike lanes and that is actually the way I bike to work when I am in a hurry, but it’s not the most comfortable way or the way I would go when riding with my daughter on the cargobike so I tried moving the route selection over to one of the paths.  It was an easy change and it converted my miles, estimated time, and directions.  The timing seems to be about right too, it estimated 13 minutes on the 18th commute and 16 on the alternate route which is about what I average.

This is really exciting news and will be an amazing asset for people who are new to bike commuting or even for experienced riders maybe venturing to a new part of town for the first time!  I’m excited to see how this will work into our Safe Routes to School program and will try some different options tomorrow.

I love how it’s all green and especially love all the paths and connectors the map shows! 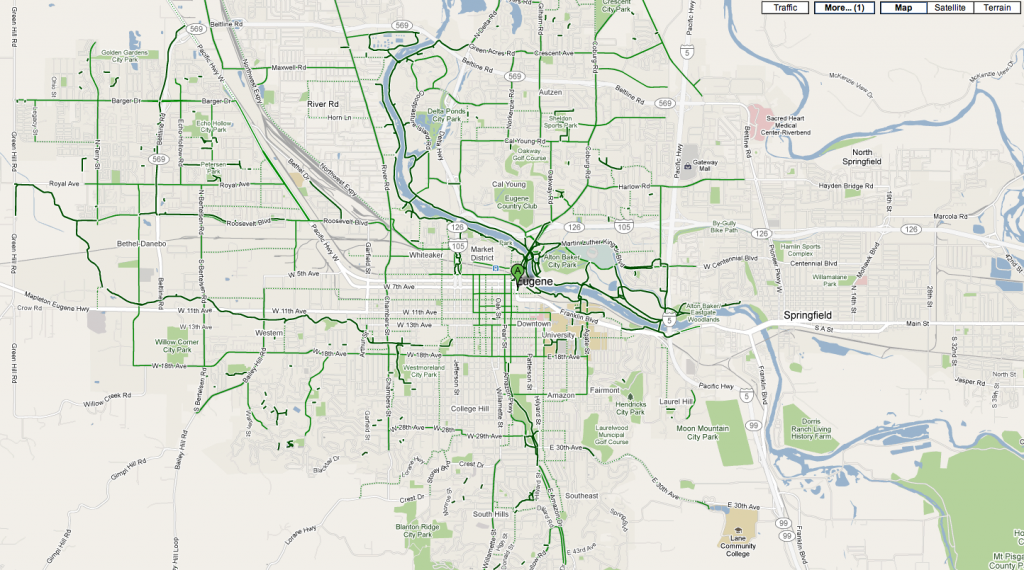 On the advocacy side we can also see where the missing links are nice and clear here. In fact I’ll draw a quick little sketch with some possible connections of our system with bike boulevards, paths or cycle tracks where there are currently gaps in the green:

Give it a try and let us know how the “Bike There” feature works for your commute around Eugene…. or for a ride you maybe haven’t tried yet. I’m sure there are kinks to work out but this is a great start and I’m excited to see where it goes!

Thanks to BikePortland.org for the tip. There is a story up on his website about this feature as well.  Follow his Twitter feed and his site for more breaking news from the National Bike Summit.

*Update: A lot of buzz around the blogosphere on the new feature. CNN did a great story with more information from Google about the algorithm they used.