Eugene men to attempt a winter bike ride around a frozen Russian lake.

Our lead story comes courtesy of the Register-Guard outdoor section.  Quoted from the R-G:

What surely ranks among the most unusual and challenging mountain bike rides in the world will be attempted later this month by an international group of adventurers that includes two Eugene residents.

The five-man team hopes to become the first to use human power to circumnavigate Russia’s Lake Baikal in winter â€” as well as the first to bicycle around the lake’s entire 1,300-mile shoreline.

If the expedition goes as planned, it will take the cyclists 43 days to pedal â€” and sometimes push â€” bicycles with studded tires from Irkutsk down the frozen Angara River to Lake Baikal, around the frozen 400-mile-long lake, then back up the river to Irkutsk.

Go the Register-Guard to read the full Article

More wrap-up after the more link:

5% of Surface Transportation Program – Urban (STP-U) funds to be spent on Bike/Ped Projects.

The request by GEARS and the Sustainability Commission to have a large portion of STP-U funds prioritized for active transportation projects (as reported in our last weekend update) was largely denied at Monday’s City Council Work Session, with some council members even voting to de-prioritize bike/ped projects.  The motion was defeated, but in the end only 5% of the STP-U funds will be spent on bike/ped projects.  Those projects will be in connection with planned motor vehicle roadway improvements on Martin Luther King Blv. and Coburg Rd.

The GEARS news blog has a detailed account of the meeting and analysis.   A quote from that analysis sums up the resulting mood of the cycling advocacy:

Having three council members who voted to move bike/ped projects to the bottom of the last priority is disheartening to say the least and to see the type of projects that should just naturally be part of any complete street talked about being taken off and then highlighted as ‘special bike/ped’ projects sort of rubs salt in the wound. These kind of improvements don’t complete an incomplete network, they simply add what should have been added already. 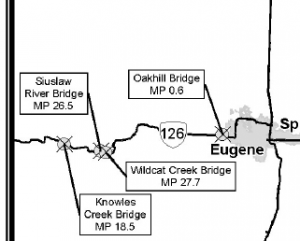 Cyclists planning on riding between Eugene and Florence on Highway 126 may want to note the following construction projects  currently planned and underway on Highway 126.  From the ODOT Bridge Project PDF:

ODOT will repair the Wildcat Creek Bridge on Oregon 126 at milepost 27.7, about five miles west of Walton.

ODOT will replace the following three bridges on Oregon 126:

The proposed Oregon Research Institute building and parking lot is just one of seven buildings planned along the Willamette River east of EWEB.  Discuss strategies to protect the area from future
development by putting pressure on the University and ORI to drop their plans and find another location for the ORI building.

*Take the door with 454 above it, between Red Agave and Morning Glory restaurants upstairs and the first meeting room to the left at the top of the stairs.

See our last weekend update for a summary of the Riverfront Research Park issues.

* Definition of a cycle track
* Examples of means of separation from traffic and from pedestrians
* Space needs for one-way and two-way cycle tracks
* Intersection treatments
* Discussion of “false sense of security” studies
* What AASHTO says about cycle tracks, and other sources of design guidance
* North American cities’ experience with design, operations and safety
Because this is a broad topic of great interest to bike/ped engineers and planners, we’re including additional time for the question-and-answer period.

Contributor View all posts by C-Gir